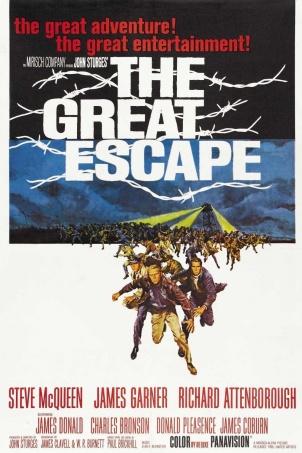 The Great Escape is the classic 1963 World War II escape thriller directed by John Sturges and was based on the true story of one of the largest escape attempts made by Allied prisoners from a German POW camp during the war. The all-star cast included Steve McQueen, James Garner, Richard Attenborough, James Coburn, Donald Pleasence, Charles Bronson, and David McCallum.

The following weapons were used in the film The Great Escape:

Luftwaffe soldiers at the camp are seen armed with Karabiner 98k rifles. Flight Lt. Hendly (James Garner) commandeers one from an airfield guard.

A Luftwaffe soldier armed with a Karabiner 98k holds back a mob trying to watch a fake fight between two POWs, intended to distract the guards from other POWs escaping in the trucks. Note the center man pushing the gun barrel into a POW's stomach with his finger on the trigger.

A Luftwaffe soldier with a Karabiner 98k puts Capt. Hilts (Steve McQueen) in the cooler, hence his name "The Cooler King".

Two Luftwaffe soldiers with Kar98k rifles put Hilts in the cooler once again for another escape attempt.

Flight Lt. Hendley "The Scrounger" (James Garner) helps guide the blind Flight Lt. Colin Blythe "The Forger" (Donald Pleasence) to one of the German planes in an airfield, armed with captured Kar98k taken from a sentry. The planes in the airfield are American AT-6 Texan trainers mocked up with German paint, although the plane they steal is an authentic German Bucker Bu 181 "Bestmann" (however, the Luftwaffe actually did have AT-6s captured from Belgium).

Wehrmacht soldiers armed with Kar98k rifles capture Hendley after the plane crashes and Blythe is shot. Notice how the rifle closest to the camera lacks hooded sights and cleaning rod, which usually indicates Russian captures.

A Spanish tracker guides Sedgewick from France to Spain with a Kar98k slung over his back.

A Luftwaffe soldier locks Hilts in the cooler at the end of the film with a KAr98k slung on his back. This gun has a straight bolt, which isn't correct for the era as the German issued models had turned bolts. This implies this is a Kar98k stock and barrel with an older 1920s straight bolt action reciever.

A Wehrmacht soldier is seen using an unknown sniper rifle to shoot Flight Lt. Colin Blythe "The Forger" (Donald Pleasence). It would appear to be a sporterized Kar98k with a scope, although an actually Kar98k sniper rifle issued at the time was not sporterized.

A Wehrmacht soldier with his sniper rifle.

The Wehrmacht soldier shoots Blythe with his sniper rifle.

The MP40 submachine gun is seen in the hands of NCOs and several camp guards, who would just as likely be issued a MP40 as a Kar98k.

A Guard holds his MP40 on Capt. Hilts (Steve McQueen) when he tries to stop the guards from shooting Ives (Angus Lennie) when he climbs the fence, snapping under the pressure when the Germans find their tunnel "Tom".

Sergeant Strackwitz (Harry Riebauer) holds his MP40 on the POWs after the escape gets interupted midway with 79 escapes.

Wehrmacht Soldiers point their MP40s at Hilts after they shoot his Motorcycle and he skids into barbed wire. Without the bolts cocked back, the guns are rather useless.

A French resistance fighter with an MP40 hands Sedgewick over to a Spanish guide.

Luftwaffe guards man MG42 machine guns in the camp perimeter towers. A group of French Resistance fighters use an MG42 to mow down German officers during a drive-by shooting. The Waffen SS are seen using an MG42 near the film's end (in reality, what was done to the escaped POW's was spread out over several instances).

A Luftwaffe guard in a tower next to an MG42.

A Luftwaffe guard fires his MG42 at Hilts when he crossed the perimeter wire to "fetch his ball".

His spotlight reveals his MG42.

A member of the French resistance guns down German officers at a street bar with an MG42.

An SS soldier fires the MG42.

All high ranking officers and soldiers at the camp keep Luger P08 pistols as their sidearms. After the escape, Cpt. Hilts (Steve McQueen) plants clear wire on a road way and causes a German soldier on a bike (secretivly played by Steve McQueen) to crash. He steals the soldier's uniform and Luger before eventually being captured.

After a guard catches the POWs climbing out of the tunnel. Hilts (Steve McQueen) runs out and yells "Don't shoot!". It's so nice how the soldiers reaction is to whip around and fire his Luger P08 at him.

One of the Wehrmacht soldiers that captures Lt. Hendley (James Garner) is seen with a Luger P08. 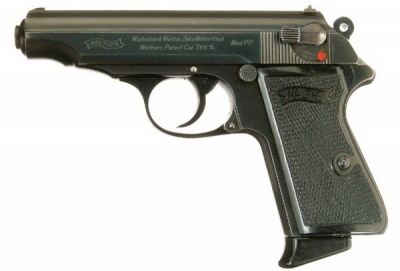 Ashley-Pitt forces Kuhn to shoot himself. Note that when the gun is "fired", the slide doesn't move and no round is ejected, indicating that the gun is a harmless flashpaper replica (firing actual blanks at such close range to an actor is extremely dangerous).

A Gestapo agent with a Walther PP.

A German officer stops Squadron Leader Roger Bartlett "Big X" (Richard Attenborough) on the street and holds a Mauser 1934 "Humpback" pistol on him before being convinced he is a citizen by his fluent German and authentic papers. While it could be a Mauser 1910 or 1914 pistol, it is likely a 1934 since this is a WWII film. 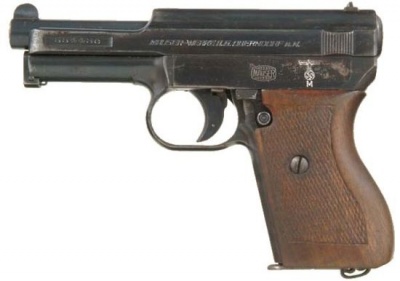 A German holds his Mauser 1934 pistol on Bartlett.

The German with his Mauser 1934.
Retrieved from "http://www.imfdb.org/index.php?title=Great_Escape,_The&oldid=1323677"
Categories: