Good, the Bad, the Weird, The

The Good, the Bad, the Weird is a Korean "western" inspired by Sergio Leone's The Good, the Bad and the Ugly. A "kimchi western" as director Kim Ji-woon described it, it was released in South Korea in 2008, and in limited release in the United States in 2010. It stars Jung Woo-sung as Park Do-won (The Good, a bounty hunter) Lee Byung-hun as Park Chang-yi (The Bad, a hitman) and Song Kang-ho as Yoon Tae-goo (The Weird, a thief) as they and other interested parties chase buried treasure (and each other) across Japanese-occupied Manchuria during the 1930's.

The following guns were used in the movie The Good, the Bad, the Weird

Park Chang-yi (Lee Byung-hun) is seen most with a Webley Mk IV revolver. His henchmen also carry them. (The movie poster above shows Park Chang-yi holding the Webley in his bare left hand. Anyone who has seen the movie knows this is a goof. His image appears to be reversed, as his boy-band hair is supposed to cover his RIGHT eye.)

Park Chang-yi reloads. "MADE IN ENGLAND" can be seen above the cylinder.

A very clear shot of the Webley. "MARK IV .38" is seen above the cylinder.

One of Park Chang-yi's henchmen with a Webley Mk IV.

Park Chang-yi with his Webley during the Ghost Market battle.

Yoon Tae-goo (Kang-ho Song) uses a pair of Walther P38's throughout the film.

Yoon Tae-goo holds up the Manchurian officers and Kanemaru.

A featurette shows how the first person shot was achieved. 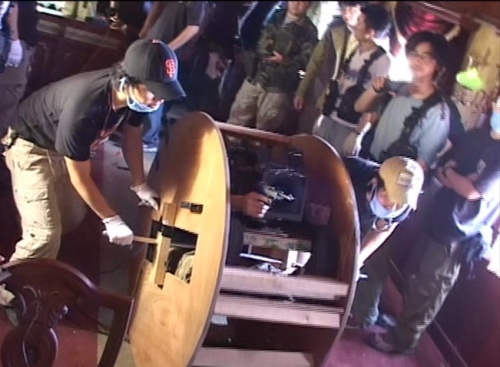 The crew rehearses the roll first. 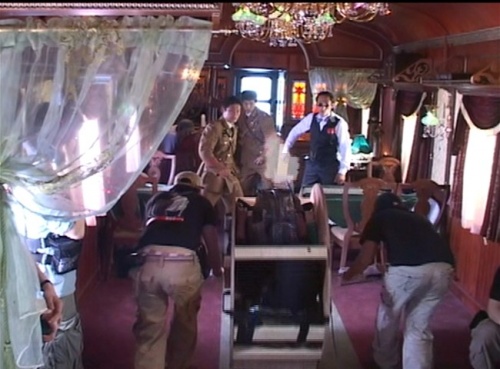 Many of the henchmen in the film are armed with Colt Official Police revolvers.

Another henchman with a Colt Official Police. The Colt-style cylinder release is seen clearly here.

Park Do-won (Jung Woo-sung) appears to carry an Smith & Wesson Model 1917 as his sidearm. He clearly favors his rifle and his shotgun, however, only using his sidearm twice. 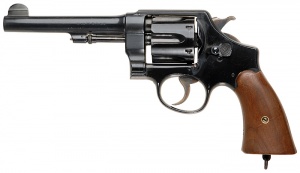 One of Park Chang-yi's henchmen with a Model 1917. This same henchman would later been seen using a Colt Official Police (see above.)

Park Do-won during the final standoff. The lanyard ring can be seen here.

A Japanese officer with his drawn Nambu on the train.

The henchman with the eye patch is carrying a Nambu Type 14.

The same henchman as above, with a better view of the Nambu.

One of The Bad's henchmen fires a Luger P08 at the Weird.

A henchman shooting at Park Do-won in the Ghost Market.

First Gen Colt Detective Specials are seen throughout the film.

One of Kanemaru's girls finds a Colt Detective Special in a bag. The Colt grips are seen here.

The barrel is not seen, but from the length of the ejector rod, this appears to be a DS.

One of the Manchurian officers with the DS from the bag.

Kim Pan-joo (Young-chang Song) pulls out what appears to be a Colt Detective Special before confronting an intruder.

The intruder turns out to be The Bad. (Not a clear picture, but it appears that the cylinder holds six rounds)

One of the bandits with a DS.

Park Chang-yi with a DS he took from one of his henchmen. He would use it as a backup piece. 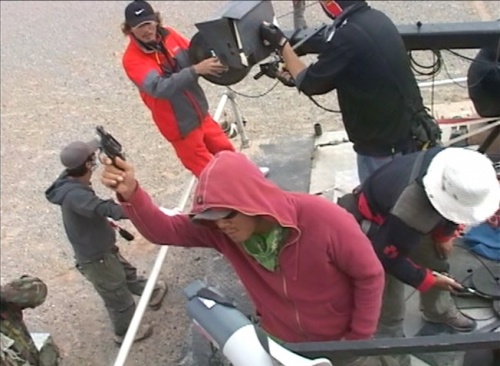 Who's going to complain? They're in the middle of nowhere.

Byung-choon (Je-mun Yun) carries a Webley Mk VI for parts of the film.

Byung-choon with his Webley Mk VI.

A member of the Ghost Market gang is armed with a Mauser C96.

One of Park Chang-yi's henchmen briefly fires a British Lanchester Mk. I* submachine gun during the fight at the Ghost Market. Park Chang-yi himself later uses one as well.

A henchman opens fire with a Lanchester Mk. I*. - the rear sights are a giveaway.

The Bad covers his escape with a Lanchester Mk. I*. - the brass mag well and the bayonet lugs are a giveaway.

A hammerless Double barreled shotgun is used by Park Do-won for the first half of the film. He seems to prefer long guns to pistols.

Park Do-won trades fire with Park Chang-yi from different ends of the train.

The Bad uses a Mauser M1908 to try to snipe the Weird. The vast majority of the henchmen in the film are either armed with Mausers, Mosin Nagant rifles, or Arisaka rifles. A Mauser 1908 with a scope later shows up.

A henchman takes cover with his scoped Mauser 1908.

A henchman chambers another round into his scoped Mauser 1908.

One of The Bad's henchmen with a scoped Mauser Model 1908. The scope and mount appear to be modern, although they are crudely mounted to the rifle

Park Chang-yi with another Mauser.

Many of the henchmen in the film are armed with original Mosin Nagant M1891 rifles.

One of the bandits with a Mosin Nagant.

A henchman with his Mosin Nagant while the other has a Webley.

Byeong-choon, with the leader of the Manchurian bandits.

Byeong-choon with his SMLE ready.

A member of the Ghost Market gang with his SMLE.

Park Do-won's primary weapon is an anachronistic Marlin Model 1894C lever action rifle standing in for the historically plausible Marlin Model 1894. He uses it even when a pistol would make more sense. He also spin-cocks it several times during the chase in the end.

Marlin Model 1894 - .44 Magnum. The version used in the film is the .357 magnum "C" version of this carbine. The .357 Magnum and .44 Magnum versions of this rifle had slight cosmetic differences from the original rifle and also were not introduced until the 1960s.

Park Do-won during the gunfight at the Ghost Market.

Park Do-won reloads at full gallop. Woo-sung Jung did all of his own riding for the film.

Park Do-won reloads his carbine for the final showdown.

A reversed shot has Par Do-won in mid cycle.

One of Park Chang-Yi's henchman uses a M48 Yugoslavian Mauser to clear the train.

Japanese troops are armed with Arisaka rifles. There's no way to tell which type.

The Japanese cavalry with their Arisakas.

Japanese riflemen with their Arisakas.

During the long chase in the end, the Imperial Japanese Army opens fire with a Type 11 Light Machine Gun.

The Imperial Japanese Army opens fire with a Type 11 LMG.

During the long chase in the end, the Imperial Japanese Army opens fire with a Type 92 Heavy Machine Gun.

The Imperial Japanese Army opens fire with a Type 92 HMG. (Pity the driver and passenger.)

The dead gunner sprays the other Japanese cavalry with the Type 92. 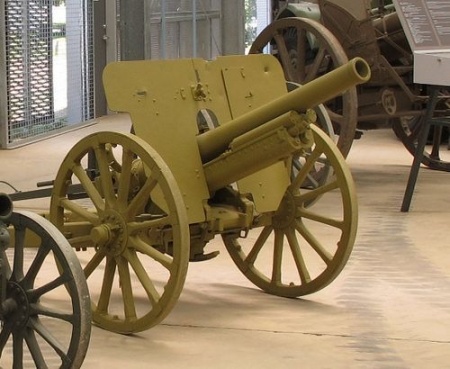 For a brief moment, when the horses were spooked by the Japanese shelling, the rifles slung on the mounted bandits switched from Mausers to rubber rifles, possibly K98Ks. The next shot, they were switched back.

As the gunfight in the Ghost Market comes to a close, one of the Weird's P38's misfires, setting the top of the pistol ablaze. The Weird then frantically blows it out.

Willys Jeeps, or at least the Chinese copies of which, appear throughout the film. These are clearly anachronisms.
Retrieved from "http://www.imfdb.org/index.php?title=Good,_the_Bad,_the_Weird,_The&oldid=1391367"
Categories: