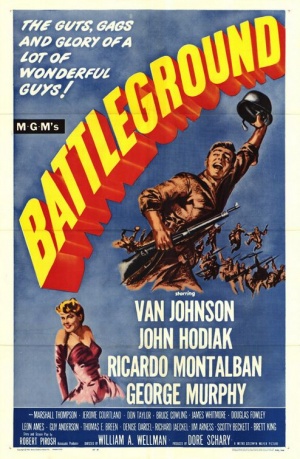 Battleground is a 1949 WWII film about members of the 101st Airborne defending the city of Bastogne during the Battle of the Bulge in the fall of 1944. Made only five years after the actual battle, Battleground was directed by legendary filmmaker William A. Wellman (The Story of G.I. Joe, Heroes for Sale) and was the recipient of Academy Awards for Best Screenplay and Best Cinematography.

The following weapons were used in the film Battleground (1949):

Wolowicz (Bruce Cowling), one of the paratroopers, is seen polishing a captured Luger P08. He throws it away after he remembers the rumor that US soldiers were shot if they are captured with German weapons on them. 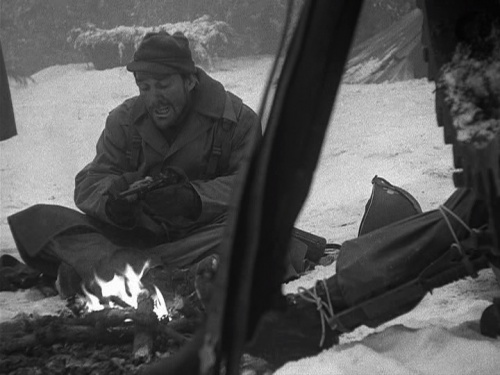 Wolowicz (Bruce Cowling), one of the paratroopers, is seen polishing a captured Luger P08.

The M1 Garand is seen used by most of the paratroopers in the 101st Airborne Division. 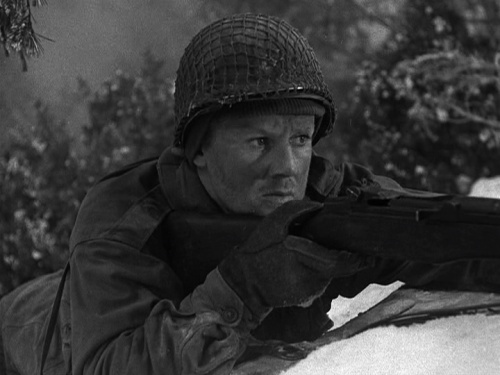 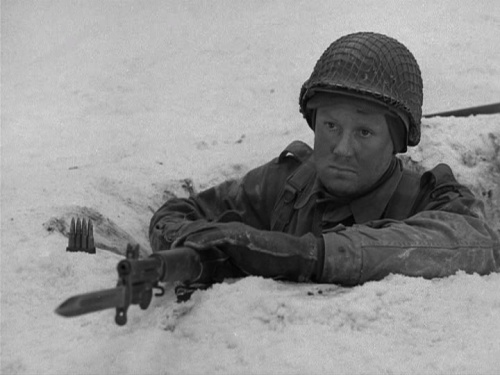 Holley (Van Johnson) fixes a bayonet on his M1 Garand as the Airborne prepares for a German onslaught.

The M1 Carbine is carried by some of the officers of the 101st Airborne Division.

Korean War Era M1 Carbine, with Birch Stock, Adjustable sight, bayonet lug, and twin magazine pouch. Most of the World War II variations of the M1 Carbine were sent back to the Military Arsenals and retrofitted with the Bayonet Lug and adjustable rear sight. This is the version seen after late 1945 and all the way until the 1960s. This version is seen most often in World War II movies, despite being anachronistic for most World War II battles 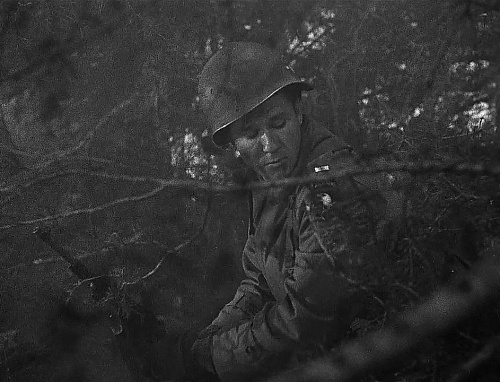 The captain carries the M1 Carbine. 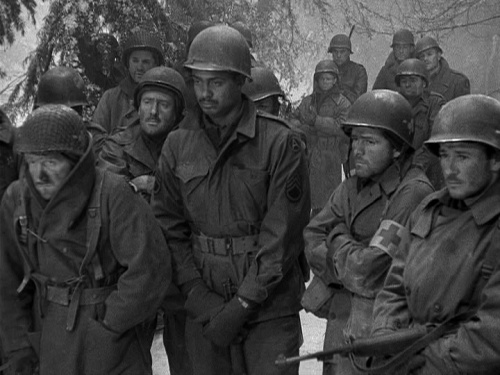 The paratrooper on the right carries the M1 Carbine. Although the film was made pretty close to the actual battle, the anachronistic bayonet lug is seen.

The surrendering German soldier has a white flag attached to a K98 rifle. Also seen carried by German troops as they are ambushed by the Airborne. 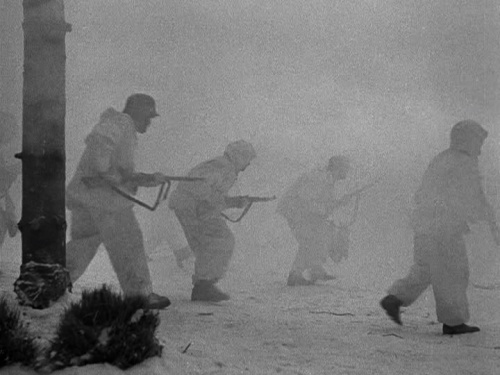 German soldiers with their rifles.

Kinnie (James Whitmore) can be seen armed with a M1928A1 Thompson.

M1928A1 Thompson with 30-round stick magazine and early 'simplified' rear sight that would be adopted for the M1 Thompson - .45 ACP 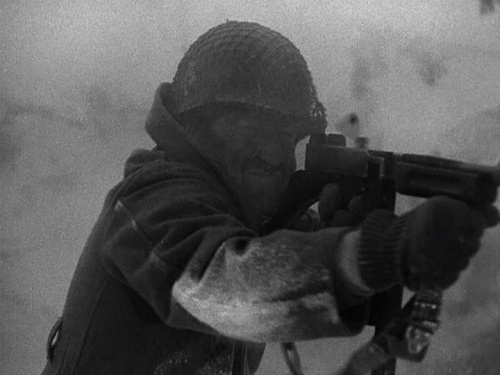 The M3 Grease Gun is seen being carried by paratroopers, notably a soldier in an officer's jeep that is confronted at a checkpoint. 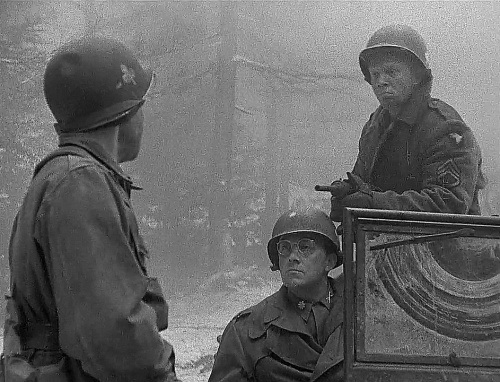 The sergeant guarding an officer raises his Grease Gun.

The Browning Automatic Rifle is seen used by Abner Spudler and other troops of the 101st Airborne. 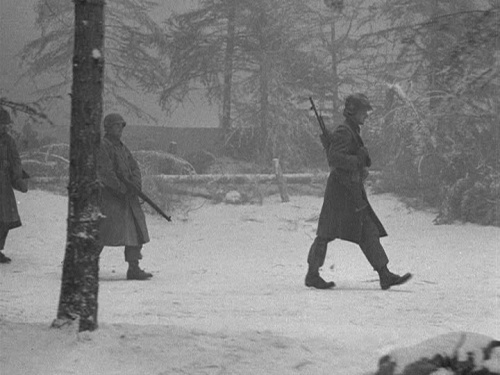 The BAR is slung on the shoulder of one of the paratroopers.

After Mac is killed during the railroad ambush, Jarvess picks up an early model Browning M1919A6 and continues the fight. 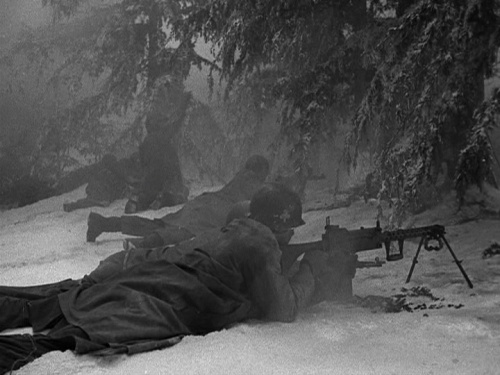 The Browning M2HB heavy machine gun can be seen mounted on an M4 Sherman tank. An M51 Quad Mount is seen as the men go into town. 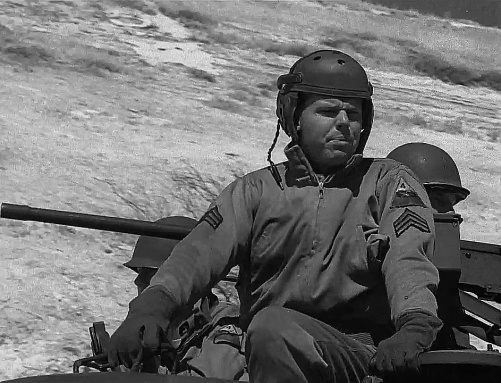 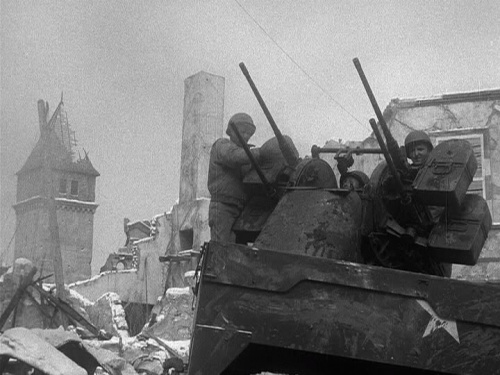