Alien³ is the third installment in the Alien film franchise. The 1992 sequel was directed by David Fincher and this time finds Ripley (Sigourney Weaver) stranded on a prison planet where she has to once again deal with a spawned Alien. Plagued by numerous production problems, the film has since been disavowed by Fincher, and has received a mixed, even polarizing, response from fans and critics.

The following weapons were used in the film Alien³:

The M41A Pulse Rifle makes a return appearance in Alien³. Although the film takes place on a prison planet, Fiorina "Fury" 161, where no weapons are present, these rifles make a brief appearance near the very end of the film, carried by commandos (according to the novelization) from the Weyland-Yutani Corporation that land on the planet to retrieve the Alien and the Queen Alien that Ripley (Sigourney Weaver) is carrying. The commandos fire the Pulse Rifle on Aaron (Ralph Brown) after he strikes Michael Bishop (Lance Henriksen, credited as Bishop II) with a wrench. The grenade launcher, while present, is never used in this film. In the novelization, the commandos carry M56 Smartguns instead.

The weapons were made from an M1A1 Thompson submachine gun with a Remington 870 shotgun underneath the shroud and foregrip of a Franchi SPAS-12. The weapon was finished with a custom-made futuristic aluminum shell. Only one functioning weapon was used on the production; this rifle had also been used previously in the filming of Aliens, although for this appearance the shroud was painted black instead of "Brown Bess" as it had been for the preceding movie. The remaining weapons were new, non-functioning props built for filming with black vacformed plastic shrouds. Notably, none of the weapons in this film feature LED ammunition counters, whereas they did in the preceding movie. 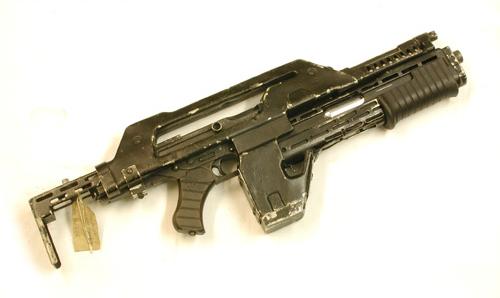 M41A Pulse Rifle. The weapon pictured here is one of the actual screen-used pulse rifles from Alien³ - Note this prop has the black paintjob as seen in this film.

Weyland-Yutani operatives carry the M41A Pulse Rifle as they enter the prison facility.

A closeup of the M41A as they watch Ripley make her final plunge.

A Weyland-Yutani operative fires the M41A on Aaron. Note that the sound effect for the pulse rifle in this film is quite different to the sound effects used in Aliens. Whether this is intentional or not is unknown.

Two PFM-1 mines are carried on one of the commandos' sleeve. 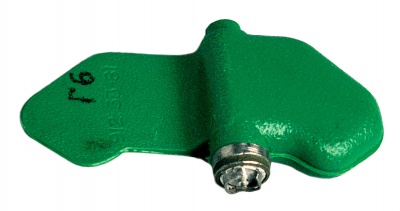 A commando with two PFM-1s on his sleeve.