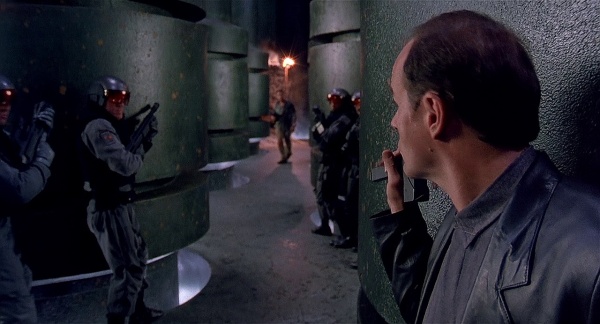 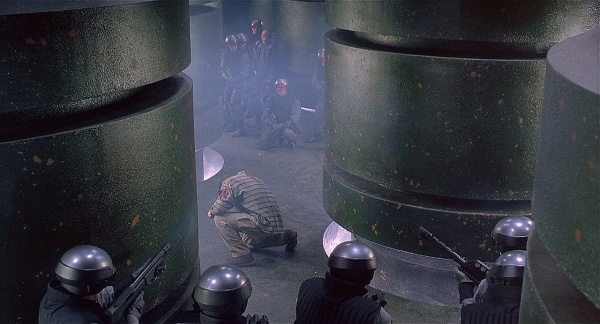 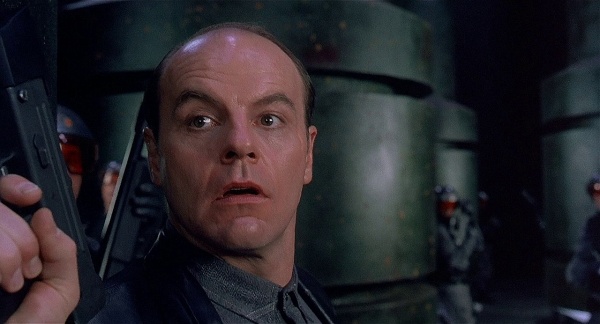 I'm not sure, but it's definitely something different. There's actually an image of one on the main page: 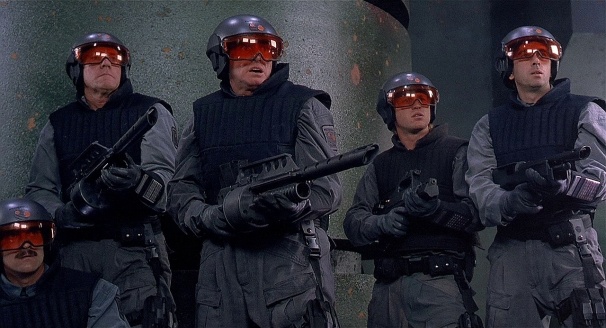 The soldier on the far right has one.
I incorrectly identified it as a poor rubber stunt copy of the more common Street Sweeper/Jackhammer knock-off shotgun, but after looking at your pictures it's definitely a different weapon altogether.--Leigh Burne 04:23, 3 April 2012 (CDT)

The one on the far right is actually different to the one in the second shot, the one there only has a short muzzle brake while this one has a replica of the barrel shroud on the fake Jackhammers. This one also has way more of the barrel visible, it looks like he must be holding the action open, so I guess the one in shot two is the firing prop and this version would rip off the shroud if you pushed the forend forward. But you can see a boxy step in the front of the forend here, which is very much correct for the bullpup Mossy forend. Evil Tim 04:50, 3 April 2012 (CDT)

I don't know, I'd still say they're the same weapon. I think that because the one in shot two is seen from above and at a distance, you can't see the angle on the muzzle brake, but otherwise it seems to be the same; you can just about make out the two slits on top, which can be seen on the fake Jackhammer shrouds in many of the images.--Leigh Burne 04:56, 3 April 2012 (CDT)

Oh, they're the same type of gun, but they're either two different weapons or the one in shot two is the one in shot four with the shroud taken off so it can be fired. the one in the second shot has a very clearly deliniated muzzle brake, while on the one in four the shroud looks to be continuous. Evil Tim 05:19, 3 April 2012 (CDT)

Definitely both Mossberg 500 bullpups , but I don't think the fact that it has the shroud on means it wouldn't fire as the Mossberg barrel is already shrouded, and the recess in the pump is a uniform width so if it goes on at all it I think it would be able to slide forwards. I think the reason they are different is just that they were dressed up differently for variety or due to lack of common parts. In the second cap it looks as if the barrel is thicker than a standard Mossberg one and also isn't tapered, so I think it may be shrouded as well but just with a different shroud. --commando552 05:30, 3 April 2012 (CDT)

Well, I'm no expert on the clearance between the Mossy bullpup forend and the barrel, but the shroud extends slightly below it and that's the most sensible reason I could think of for him holding it here with the action open and the shroud being missing when he's firing it (I can see what looks like smoke in front of the barrel in the second image, and don't have a copy to hand to check if it's fired in the other shot or if he operates the forend). Evil Tim 05:40, 3 April 2012 (CDT)

Maybe he's holding the action open because he's just finished firing it and he hasn't closed it yet after the final shot? I don't see why you assume he HAS to be holding open or else it'll fall apart.--Leigh Burne 05:53, 3 April 2012 (CDT)

Well, like I said, I don't have a copy on hand to check what he's doing here. But I don't see why he'd hold the action open if he didn't have to, or why the shroud vanishes when firing. Usually when things like this happen (as with, say, the vanishing muzzle brake on the fake Panther tank in A Bridge Too Far) it's because something would get broken if it was left on when the weapon was fired. Evil Tim 06:06, 3 April 2012 (CDT)

You could be right. I'd just assumed it was a bit of acting on the part of the guy holding the gun - he was so shocked at seeing Quiad get back to his feet that he'd simply frozen in the middle of racking the action. Like you said, would probably help to see the scene in motion.--Leigh Burne 06:35, 3 April 2012 (CDT)

Please help ID this other rifle 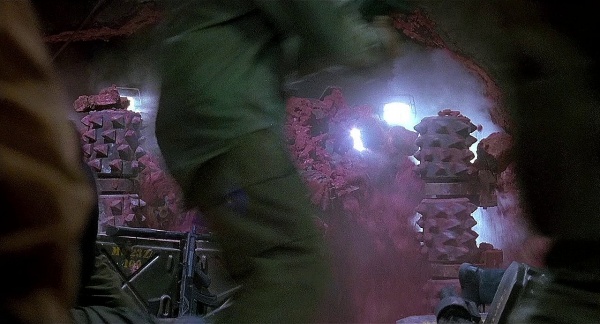 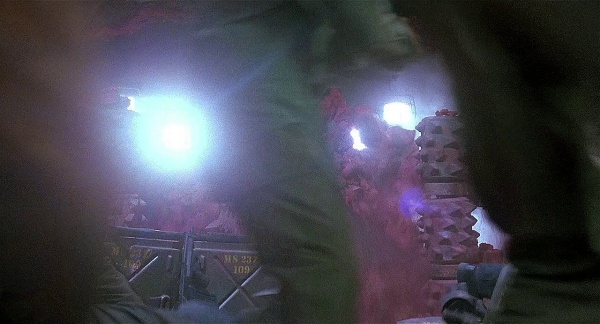 I think it is a Gwinn Firearms/Bushmaster Armpistol (only difference is the safety which I can't make out), but slightly modified as it seems to have a handguard over the exposed barrel along with what looks like a cheek rest on the upper receiver. --commando552 02:40, 5 April 2012 (CDT)

Is the Goncz comment on the Main Page legit? If so, are we gonna have to remove the gun's page, or.. well, lets just say should I be worried this might be one of those feared legal things that risk the integrity of the whole site? I know there was some controversial history over this weapon, as noted by the info on the gun's page. Anyway, what does all this mean? StanTheMan 17:47, 19 September 2010 (UTC)

I sent a message to Bunni and Moviepropmaster and I locked the movie page so only admin can make Changes. we'll get it figured out. --Jcordell 18:21, 19 September 2010 (UTC)

Yes, the guns in the film were Gonzc guns, Syd told me that YEARS ago, but WTF? The Claridges are all over the place. We NOTE the fight between the Claridges and GOncz on the Gun's page already. But we're not an official source of LEGAL info. Is this guy such a loon that he screams bloody murder because we MENTION the Claridge Hi-Tec? He can't demand the elimination of information. Also he has his head up his ass. He screams that this is intentional misinformation. How was it intentional? Did IMFDB users get together and CONSPIRE to somehow damage the reputation of him and his firearm? I am moving his diatribe here. I, being a gun guy for years, don't appreciate him threatening US because he has a beef with the Claridge people. MoviePropMaster2008 22:01, 19 September 2010 (UTC)

- Neither do I, MPM. And so I guess this answers my now considerably silly question, I now have no worry. In fact I can't help but laugh at myself. But also at this tripe. 'Bar' the original poster of the page? If the logs are right, that user hasn't even been around in about three years. Hah. Again I laugh at this. But, I gotta laugh at myself too - God was I being silly. StanTheMan 02:54, 20 September 2010 (UTC)

Yes yes yes, BAN the original maker of the Total Recall page for daring to put a pic of a Claridge even though they are nearly identical guns! Wooo. A judge a jury would HANG a man for that ;) MoviePropMaster2008 17:10, 20 September 2010 (UTC)

Okay the page has been unlocked to registered users. And I see that there is now a link in the article to the pistol's page. Well that was fun. Stupid, but it did break the routine. --Jcordell 01:42, 21 September 2010 (UTC)

This posting is the most miss represented truth / plain english is a Big Lie!!!! The Claridge was not even in the existence, when the Goncz Weapons were invented in 1983 and produced since 1984. Also when the the film was made in Mexico I have the original Contract, that I supplied the weapons for the film. I had two Federal lawsuits against Coralco / the production company for breach of contract and against the claridges for Patent and Intellectual Property infringements.

The claridges made unauthorized copies, that was altered and made it the most unsafe firearm on the market. Highly recomended: Do not use the Claridge guns as they are unsafe and will result in injury or death.

Please do not misslead the public with a knowingly posting incorect info. We highly recommend to delete any and all postings as to the claridges.

I highly recommend to bar the originator of the Page as you are liable of miss representation. I will also forward this to my attorney: Dr. Webb for further action.

The above statements are true as I am the John Goncz, the inventor and the manufacturer of the Goncz Weapons.

Dear Mister Goncz, Your manner and demeanor is NOT appreciated. Frankly you are not building any sympathy for you OR your complaint against the Claridge manufacturers or CAROLCO (correct spelling). Regardless of whether the Claridge people in Northridge caused legal harm by unduly copying your design, what in the hell does that have to do with THIS site? We are not liable for ANYTHING. I showed your statement to my lawyer and he laughed out loud. IMFDB does not promote the Claridge over your firearm, nor does it even offer a preference. We are not a gun review site, we are a chronicle of weapons that appear in movies. Besides, threatening EMAIL posts do nothing and more importantly, PROVE NOTHING. If you know that a Goncz appeared in a film for sure, then we welcome the information. But you cannot demand that we cease to RECOGNIZE the existence of the Claridge at all. That is utterly ridiculous. I for one KNOW that there are Claridges in movie armory inventory. Whether or not you believe them to be unsafe firearms is irrelevant. If they appear in a film or TV show then we list them here as a matter of record. MoviePropMaster2008 22:07, 19 September 2010 (UTC) 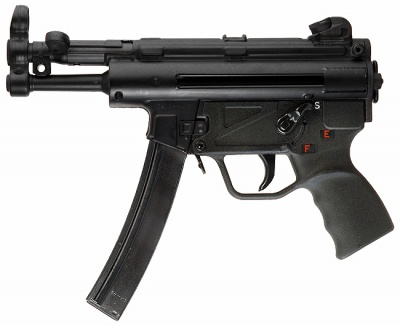 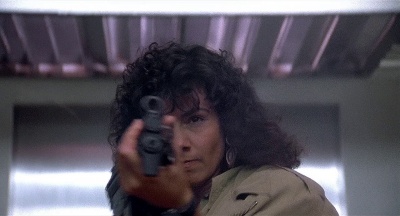 Melina opens up with MP5K. Eyes are open.

In Total Recall, You can see the 'Lip' under the barrel which is part of the Foregrip, but how she holds the Gun suggests the Grip has been sawn-off purhaps.

I'm not sure if any of you noticed this, but at the part of the film where the goons think they find Quaid and open fire, the guns had muzzle flashes. But the micro uzi's muzzle flash revealed something very unusual; the barrel has holes on the left side only instead of on the top where typical compensator holes are suppose to be. Wouldn't this cause the micro uzi to stray off to the right and scatter its rounds instead of force the barrel down and keep the bullets firing in a straight line? Also, will this image be added to the main page? 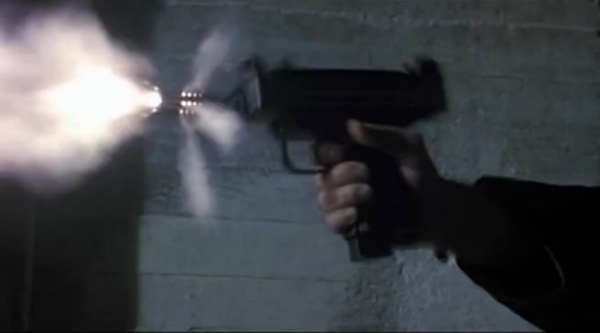 The micro uzi's muzzle flash reveals a well-hidden detail not seen through most of the film; the holes are placed in the left side of the barrel instead of on the top. 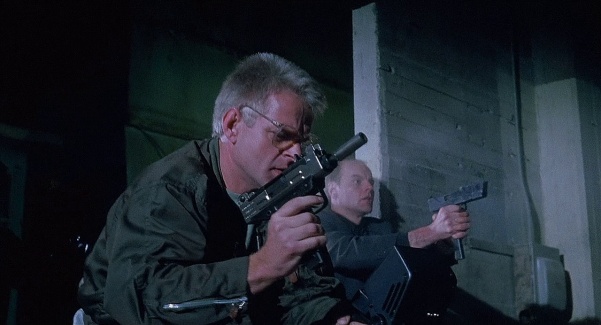 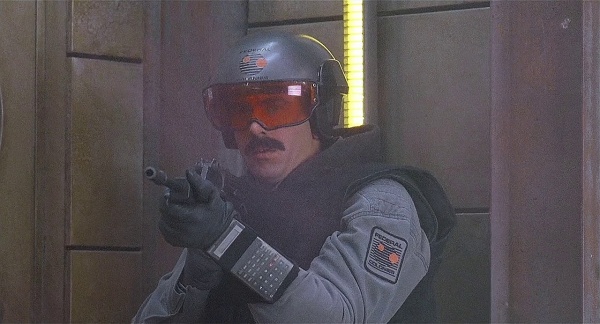 Colonial soldier with the rifle.

lol!, there are a few lookalikes in this movie. Helm looks like Timmy Mallett (especially when he gets it in the nuts), the woman with the 3 knockers looks like Jessica Ennis.