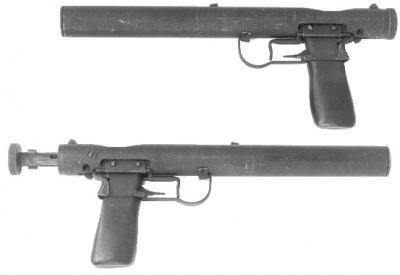 Welrod Mark I - 9x19mm. The Mark I has a trigger guard and front sight halfway along the weapon rather than near the muzzle; it is somewhat longer and heavier, and has a 6-round magazine as opposed to the Mark II's 8. The lower shot shows the action pulled back after the knurled knob is given a quarter-turn to the left.