Wedding in Malinovka (Svadba v Malinovke) is a 1967 Soviet action comedy movie directed by Andrei Tutyshkin. The story is set in an Ukrainian village during the Russian Civil war.

The following weapons were used in the film Wedding in Malinovka (Svadba v Malinovke):

Gritsian with his Nagant revolver. Note the extended position of the ejector rod which can be seen in several movies. This is a common defect of old revolvers.

Yashka the Artilleryman cleans his Nagant.

Another view of Yahka with a Nagant.

Gritsian carries a Nagant and a Mauser C96 tucked at his belt.

Petrya holds a Nagant. His revolver also has extended ejector rod (it can be same prop reused or just another sufficiently worn Nagant).

Yashka aims his Nagant (again the gun with extended ejector rod) at Popandopulo who tried to escape in women disguise.

Popandopulo carries a Reichsrevolver in pocket of his luxurious red breeches.

Popandopulo draws his revolver during the conflict on feast.

He aims the revolver at Nazar Duma who poses as vagrant accordion player.

Popandopulo aims his Reichsrevolver at brigand Smetana (Aleksei Smirnov) who tries to steal a part of loot.

Another handgun used by Popandopulo (Mikhail Vodyanoy) is a compact Smith & Wesson revolver, supposedly a Smith & Wesson 4th Model or its clone of Belgian or Spanish manufacture. This revolver is also seen in other Lenflim productions, notably Priklucheniya Sherlocka Holmsa i Doktora Watsona. 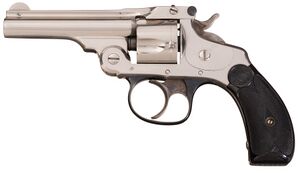 Popandopulo aims Smith & Wesson revolver at Smetana (later in the same scene he changed this small revolver to larger and more "frightening" Reichsrevolver). The shape of the front sight and the trigger guard match the 4th Model.

Another view of Popandopulo's Smith & Wesson.

Both Gritsian's (tucked in his belt) and Popandopulo's (in wooden holster) Mausers are seen.

A closer view of Gritsian's Mauser.

Popandopulo aims his Mauser at Nazar Duma who poses as vagrant accordion player.

Gritsian shoots his Mauser pistol in the air to threaten the villagers.

Gritsian with his Mauser pistol in hand.

Gritsian with Nagant M1895 and Mauser C96 tucked in his belt.

A coachman carries an M91 rifle. Note the hex receiver.

Another view of the M91 Infantry rifle of the coachman.

A brigand in black vest in center holds an M91 Infantry rifle.

Another view of same brigand's rifle.

An M91 Infantry is seen near a brignad (Nikolai Pishvanov)

Same brigand with his rifle.

M1891 Dragoon rifles are also seen in hands of brigands.

The barrel of M91 Dragoon rifle is seen at the right.

Another view of the same rifle at the right.

Many of Red Army men and brigands are armed with out of time Mosin Nagant M1938 Carbines. Mostly the carbines lack hooded front sights, probably to make them look more like early versions of Mosin Nagant.

Smetana (Aleksei Smirnov) (at the right) hold an M38 Carbine.

A brigand in center carries an M38 Carbine.

M38 carbines are seen at the camp of Red Army cavalry squadron.

A brigand fires M1938 carbine during the night shootout.

A brigand in center carries an "obrez".

Two brigands (Yuriy Shepelev in center, uncredited one at the far right) are armed with "obrez".

Several "obrez" are seen when brigands raise their weapons on disguised Nazar Duma.

A brigand holds an out of time Karabiner 98k rifle. Later a captured 98k is seen in hands of the village headman Grandfather Nechipor (Yevgeny Lebedev).

A brigand with 98k rife.

Grandfather Nechipor with a 98k rifle.

Yashka threatens Nechipor with his gun.

During the meeting of Yashka the Artilleryman (Mikhail Pugovkin) and Grandfather Nechipor (Yevgeny Lebedev) a Berdan bolt-action shotgun (commonly known in Russia as "berdanka") passes from one to another.

Yashka holds "berdanka" shotgun. Note that the handguard is shorter and of another color than on Yashka's first gun, and the bolt handle differs in shape.

The shotgun leans against the tree.

Maxim M1910/30 machine guns are mounted on tachanka carts of Reds and brigands.

A Maxim of Red unit is seen at the background.

A Maxim on the brigand's tachanka. This is the same prop that was earlier seen on Reds tachanka.

A Maxim M1910 is also seen mounted on brigands' tachanka.

Another view of the machine gun.
Retrieved from "https://www.imfdb.org/index.php?title=Wedding_in_Malinovka_(Svadba_v_Malinovke)&oldid=1322649"
Categories: