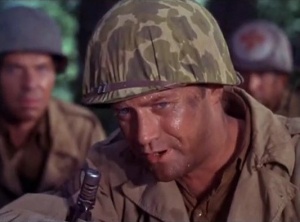 Vic Morrow (1929-1982) was an American actor best known for his starring role as Sgt. "Chip" Saunders in the television series Combat! as well as Roy Turner, the opposing Little League coach in the original The Bad News Bears. He was also the father of actress Jennifer Jason Leigh. Morrow was killed along with two child actors in a tragic accident on the set of Twilight Zone: The Movie in 1982.