I know a little about guns, mostly caliber, weight, and for some guns, their characteristics.

I'm an avid airsofter, although far from being a pro. Maybe I'll post some pictures of my guns (probably not)

I'll be posting some guns I make on Pimp My Guns.com, so watch for that.

Machete - Created and screencapped a bit of it.

The Assassination of Richard Nixon - Created and screencapped.

Kane and Lynch: Dead Men - See above. Recently, I revamped the text of the page and added a lenghty intro.

Elfen Lied - Revamped along with PistolJunkie

The Suffering: Ties That Bind - Created and screencapped.

The Crook - Created and screencapped. What a good movie.

Revolver - Revamped most of the text and screenshots. Also added missing weapons and pictures. Too bad the movie made no sense...

The Darkness II - Created and added what available screens.

Brothers in Arms: Earned in Blood - Added screens for most of the weapons.

The Last Emperor - Created and added the sceens, still need to finish it, actually.

Nobody Loses All the Time - Created and screencapped.

There Be Dragons - Created and Screencapped.

Sam Peckinpah - Added a picture and gave everyone of his films an infobox.

To date, I have added infoboxes to 45 pages!

Springfield 1911A1: Out of the two guns I fired (the other being an 9mm FN-P) I liked this one a bit less. I didn't hate it, but the recoil was just a tad much for my liking. I could handle it, but I preferred the 9mm. 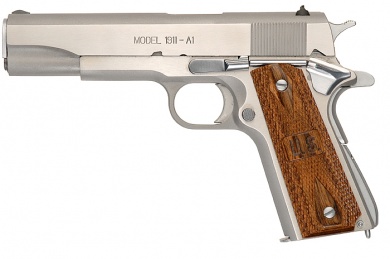 The grips were the same, but the sides of the slide were shinier than the top and bottom.

FN FN-P 9mm: I actually thought I would like the 100 year-old steel design over the new polymer pistol, but I was wrong. The FNP felt better balanced in my hands and the 9mm's recoil was better over the 100-ish rounds I fired. 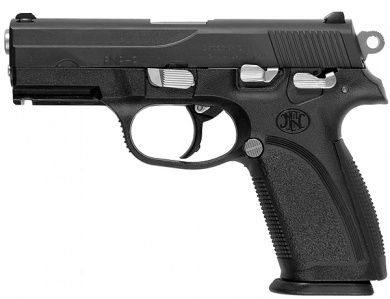 Sadly, the accents were not the stainless steel seen here.
Retrieved from "https://www.imfdb.org/index.php?title=User:BeardedHoplite&oldid=570963"