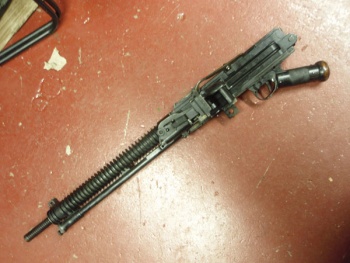 The Type 11 was a light machine gun used by the Imperial Japanese Army in the interwar period and during World War II. The Type 11 came into active service in 1922, and some 29,000 were produced by the time production stopped in 1941. It was the primary Japanese light machine gun through the Manchurian Incident and in the early stages of the Second Sino-Japanese War. Although superseded by the Type 96 in production in 1936, it remained in service with front-line combat through the end of World War II.

The Type 91 was a tank-mounted variant of the Type 11, without a stock or bipod.

The Type 89 flexible machine gun was an aircraft gun developed from the Type 91. It was a twin gun (like the MG 81Z) and rechambered for 7.7x58mmSR, thus sharing ammo with the entirely mechanically unrelated Type 89 fixed machine gun, a Vickers Class E derivative.

The Te-4 was effectively the Type 89 split into a single gun (specifically the left-hand gun) and further refined, using a circular pan magazine.