True Romance is a 1993 romantic crime film that stars Christian Slater as Clarence and Patricia Arquette as Alabama, two young newlyweds who decide to travel to Los Angeles to sell off a suitcase full of cocaine that they took off Alabama's drug-dealing pimp. In their journey, they are pursued by both the mob and law enforcement. The film was directed by Tony Scott from a screenplay by Quentin Tarantino, the very first that he sold to Hollywood. The cast includes Gary Oldman, Dennis Hopper, Brad Pitt, Samuel L. Jackson, James Gandolfini, and Christopher Walken.

The following weapons were used in the film True Romance:

Clarence Worley (Christian Slater) uses a snub-nose Smith & Wesson Model 66 in the first half of the film. This revolver manages to fire 7 shots when Clarence shoots it out with Drexl.

Great closeup of the Model 66 as Clarence continues to fire the revolver.

Clarence bursts into the hotel room where Alabama had just been assaulted.

Clarence Worley (Christian Slater) packs a Smith & Wesson Model 625 revolver throughout the second half of the film, after taking it from Virgil (James Gandolfini). He uses it to intimidate Elliot (Bronson Pinchot). In the uncensored Director's Cut of the film, Alabama (Patricia Arquette) also uses it during the final shootout, after she thinks Clarence is dead. 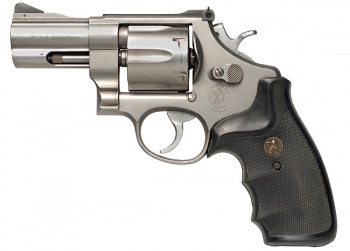 Virgil draws his Model 625, but Alabama sprays him with a make-shift flamethrower made from a hair spray bottle and lighter.

Clarence checks his revolver just before entering the hotel.

Elliot (Bronson Pinchot) is threatened with the revolver.

The revolver is put to Elliot's cheek.

Clarence pulls his revolver out on Elliot to make sure he hasn't cheated them.

Clarence places his revolver on the sink in Lee's bathroom.

Alabama fires the revolver in the Director's Cut.

A bright nickel Smith & Wesson Model 36 is briefly seen as one of the many guns packed into the bags of the Mafioso gunmen.

A mobster picks up several shotgun shells and a revolver.

Det. Wurlitzer (Michael Beach) during the final standoff pulls out his Smith & Wesson Model 649 backup revolver, firing it akimbo with his Beretta. 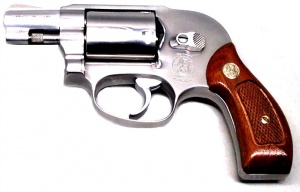 Wurlitzer fires his Beretta with a S&W Bodyguard.

Wurlitzer with his Bodyguard and Beretta in a standoff with Luca.

Frankie (Frank Adonis), another of the Mafioso, carries a Beretta 92FS Inox, which he holds to the head of Clifford Worley (Dennis Hopper) and later a woman he holds hostage in the hotel.

Clifford enters his trailer only to have an Inox placed on his head.

Clifford Worley (Dennis Hopper) is threatened with the Inox.

Closeup of a Beretta 92FS Inox being loaded before the final standoff.

Frankie holds a woman hostage in the hotel after the final shootout.

Most of the police officers in the film, including Det. Nicky Dimes (Chris Penn), carry Beretta 92FS pistols, as were issued to the LAPD at the time. The Italian gunman, Luca (Paul Ben-Victor), also draws his own Beretta during the final standoff.

On the right, Det. Wurlitzer (Michael Beach) fires his Beretta along with a S&W Bodyguard.

Luca (Paul Ben-Victor) draws his Beretta after Dimes tells him to drop his shotgun. 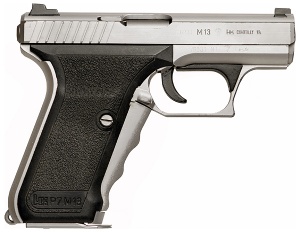 H&K P7M13 - 9x19mm. This is the screen used gun carried by Christopher Walken in the film.

Don Vincenzo with the pistol.

Closeup of the H&K P7M13 being fired. The M13 is visible on the slide.

A Sicilian mobster is briefly seen with a Desert Eagle Mark VII in the weapon-assembling scene before the final shootout.

A Desert Eagle and extra magazines sit on the mobster's table.

Drug dealer and pimp Drexl Spivey (Gary Oldman) uses an Ithaca 37 "Stakeout" to kill the drug dealers he stole from.

Ithaca 37 "Stakeout" blued finish with wooden forearm. The one in the movie has a synthetic forearm - 12 gauge

Drexl prepares to shoot the first of two thugs.

The Sicilian hitman Virgil (James Gandolfini) carries a Remington 870 sawed-off shotgun when he confronts Alabama while waiting for Clarence to return. Alabama (Patricia Arquette), after grabbing it from him, kills him by shooting him and beating him with it. Luca (Paul Ben-Victor) also carries a sawed-off Remington 870 as the mobsters question Floyd (Brad Pitt) about Clarence, Alabama, and Dick, and during the final shootout.

Virgil smiles with his Remington in his lap.

Virgil, in the mirror, watches over Alabama.

The Remington sits on a bed with ammunition being packed away.

Quite a few shotguns sit on the bed as the mobsters pack.

Luca holds his shotgun on Floyd.

Luca hides in the hotel room with his shotgun.

Marvin (Kevin Corrigan), one of the Mafiosos', uses a Mossberg 500 Cruiser in the final standoff.

Marvin aims his Mossberg at Monty.

Boris, with his Uzi, and Monty, with his MP5K, watch over Clarence, Alabama, and Dick.

Monty holds his MP5K up at the police bursting into the room.

Boris holds his Uzi on Clarence, Alabama, and Dick as Clarence puts his revolver away.

Boris, brandishing an Uzi, confronts the police with the assistance of Monty's MP5K.

Close up of the Uzi firing.
Retrieved from "https://www.imfdb.org/index.php?title=True_Romance&oldid=1507085"
Categories: