To Skin a Spy (French title Avec la peau des autres, Italian title Sciarada per quattro spie) is a 1966 French-Italian spy thriller directed by Jacques Deray and based on the novel by Gilles Perrault. Pascal Fabre (Lino Ventura), a French intelligence operative, is sent to Vienna to clear up suspicions that the head of the French intelligence network in Austria, Margeri (Jean Bouise), is a double agent. The situation is complicated by the fact that Soviet agent Chalieff (Wolfgang Preiss) and his men unfold a real hunt for a microfilm that is hidden in Margeri's cane.

The following weapons were used in the film To Skin a Spy (Avec la peau des autres):

The revolver in Kern's dead hand.

An FN Model 1922 is used by Pascal Fabre (Lino Ventura) throughout the movie. The character uses his left hand for shooting, and this is an intentional plot element. 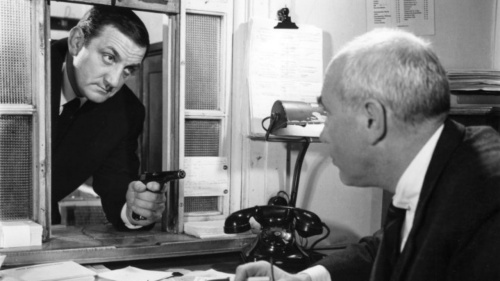 The same scene on a promotional image.

Another view of Fabre's pistol in the same scene.

One of Chalieff's henchmen holds a Luger P08 in the scene in the photo studio.

The henchman holds Margeri at gunpoint.

Fabre picks up the pistol of the killed henchman.

When Chalieff's henchmen kidnap Margeri, one of them (Paul Pavel) is armed with a Unique Model 17. 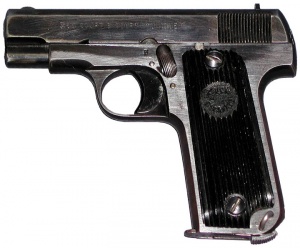 A henchman draws his pistol in the scene in the photo studio. The hammer spur is seen.