From Internet Movie Firearms Database - Guns in Movies, TV and Video Games
(Redirected from The Water Diviner)
Jump to navigation Jump to search

The Water Diviner is a 2014 Australian historical drama that marked the feature film directorial debut of Russell Crowe. The film's setting takes place in 1919, as Joshua Connor (portrayed by Crowe), an Australian farmer, begins a search for his three sons, all of whom went missing following the horrific battle at Gallipolli, Turkey in 1915. As the story progresses, Crowe gets involved with the Greek-Turkish War of 1919-1922. The film's cast also includes Olga Kurylenko, Jai Courtney, Cem Yilmaz, and Yilmaz Erdogan.

The following weapons were used in the film The Water Diviner:

Major Hasan carries a Mauser C96 "Red 9" and is briefly seen shooting it. Later a Greek soldier captures it and is about to use it on Hasan himself. 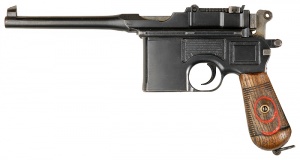 Hasan firing during the train ambush.

A Greek soldier gloatingly loads Hasan's C96 in front of him as he prepares to execute Hasan. The cartridges appear to be 9mm Parabellum instead of the bottlenecked 7.63mm Mauser

The leader of the Greek ambush party carries a Mle 1892 Revolver.

The Australians are seen with the contemporary Lee-Enfield No.1 Mk.III.

Sergeant Jemal (Cem Yilmaz) inspects a boobytrap SMLE left behind by the Anzac after they retreated from Gallipolli. The striking magazine cut-off is visible.

The Connor brothers in action at Gallipolli with their Mk.III's in a flashback.

An Anzac soldier shooting Turkish wounded after capturing a trench.

The Commonwealth troops in Istanbul carries mockup Mk.III's. They are easily spotted due to the bolt handle being too far forward and the generally bulky appearance of the weapon.

Note the bolt handle's incorrect position on the weapon on the left. The magazine also seems to be too large compared to the Mk.III further indicating a mockup.

Note the overall incorrect appearance of the weapon on the right.

In a brief shot, the anachronistic SMLE No.4 is shown during the Gallipolli battle.

The protruding barrel gives away that it is a No.4 as opposed to the historically correct Mk.III.

The Turks are almost equipped with post-WWI updated Mauser 1903/30 Rifles, both during the Gallipolli battle flashback and later.

Turkish soldiers preparing to assault at Gallipolli. Note the M1903 large stripper clip bridges and the notch, for 7.92x57mm rounds, on top the receiver.

The soldiers discovers the Anzac soldiers have already departed with the trenches now standing empty. The bayonets seem to be correct M1890 sword bayonets.

Major Hasan's soldiers uncover their rifles during the train ride.

Some Turkish Model 1938 rifles can be seen among the Mausers.

The soldier in center readies his Mauser. Note the smaller stripper clip bridges and the lack of the notch.

One of Major Hasan's (Yilmaz Erdogan) soldiers is armed with a Gewehr 1898 during the train scene.

A Turkish soldier uses a Mauser 98AZ Artillery Carbine during the train ambush.

Note the hooded sight and the stacking hook just underneath the muzzle.

One of the Greek soldiers uses a Berthier Mle 1907-16 during the train ambush.

A Turkish Fusil Modèle 1916 Carabine is used by one of the Greek raiders during the train ambush.

Berthier Model 1916 Carabine. This model differs some from the Turkish version but is essentially the same

The Greek raiding party all carry bolt action rifles of an unknown sort. Some are possibly a mockup SMLE Mk.III.

In a flashback, Connor recalls his sons after a successful hunt. The eldest is carrying a small bolt action rifle.

A Greek soldier is seen with a Bergmann MP18 during the train ambush.

The soldier mows down some Turks inside the wagon.

The Turkish and later Greek soldiers are armed with a Maxim MG08 fitted with a Z.F.12 scope mounted on a 'sledge' mount.

The Maxim used during the Gallipolli battle.

Used again at the train ambush by Greek soldiers. This is most likely the same MG as used in the Gallipolli scene.

A Jam Tin Grenade is installed as a booby trap in No Man's Land. 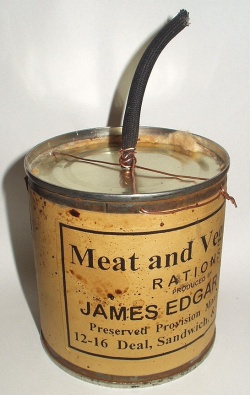 At least one Turkish civilian is armed with a double-barrelled shotgun and another with what looks like a single barrel.

Civilian on the left with what looks like a single barrel shotgun. (subtitles are hardcoded)
Retrieved from "https://www.imfdb.org/index.php?title=Water_Diviner,_The&oldid=1386813"
Categories: