Sons of Katie Elder, The

From Internet Movie Firearms Database - Guns in Movies, TV and Video Games
(Redirected from The Sons of Katie Elder)
Jump to navigation Jump to search

The Sons of Katie Elder is a 1965 Western starring John Wayne as the eldest of four brothers who reunite to attend the funeral of their mother. When they discover that the deed to their land may have been unjustly taken from them by an unscrupulous gunsmith, the brothers find themselves having to fight to regain what is rightfully theirs. The film co-starred Dean Martin, Earl Holliman, George Kennedy and featured Dennis Hopper in an early role. The plot of this film was also loosely adapted into the 2004 film Four Brothers.

The following guns were used in the film The Sons of Katie Elder:

The Single Action Army revolver is the most common handgun used in the film, used by John Elder (John Wayne) as well as by Curley (George Kennedy).

The Winchester Model 1894 is the main rifle seen used in the film by all four Elder brothers as well as in the hands of Curley and Dave Hastings (Dennis Hopper).

Morgan Hastings (James Gregory) is seen using the Remington-Keene Deluxe Sporter rifle fitted with a scope and with a shortened magazine tube as his sniper rifle in the film, noted by its external hammer mounted on the back of the bolt. Based on the muzzle diameter it appears to be chambered in .45-70. A similar rifle is seen used in Young Guns II, Joe Kidd, and Crossfire Trail. 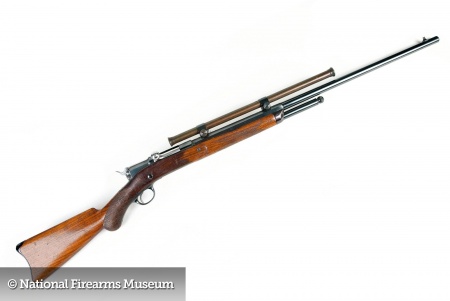 Sheriff Billy Watson (Paul Fix) carries a 12 Gauge Double Barreled Shotgun when breaking up a fight in a bar.