From Internet Movie Firearms Database - Guns in Movies, TV and Video Games
(Redirected from The Pledge)
Jump to navigation Jump to search 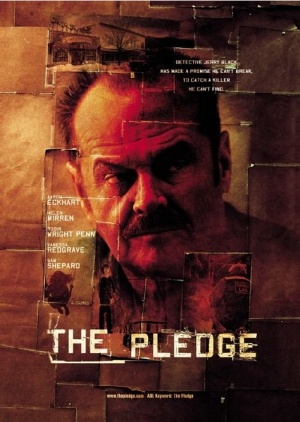 The Pledge is a 2001 drama starring Jack Nicholson as Jerry Black, a police officer who makes a promise to catch the killer of a young girl on his last day before retirement. The film was directed by Sean Penn and co-stars Benicio del Toro, Mickey Rourke, Vanessa Redgrave, and Aaron Eckhart.

The following weapons were used in the film The Pledge:

Jerry Black (Jack Nicholson) carries a Generation 2 Glock 17 pistol throughout the whole movie. Several other Glocks are also seen in holsters of other police officers.

Jerry Black (Jack Nicholson) pulls out his Glock 17 at the police station.

Jerry holds the Glock 17 on Toby.

Jerry fires his Glock 17 as he bursts into the church, where he suspects the killer is hiding.

The Model 19 lying on the ground.

A police officer holds an M4A1 Carbine at the forest near the end of the film.

A shooter hiding between bushes with his M4A1 Carbine on target.

Another policeman with an M4A1.

A slightly better close-up of the M4A1.

A police sniper is seen with a Remington 700PSS rifle near the end of the film. The gun is never seen fully in one frame.

Part of the scope and bipod of the gun.

Image of the Harris bipod as the camera pans through the rifle.

The barrel of the rifle.
Retrieved from "https://www.imfdb.org/index.php?title=Pledge,_The&oldid=1112721"
Categories: