From Internet Movie Firearms Database - Guns in Movies, TV and Video Games
(Redirected from The Long Goodbye)
Jump to navigation Jump to search 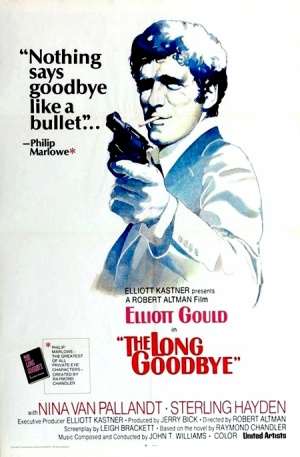 The Long Goodbye is a 1973 mystery crime drama directed by Robert Altman and based on the Raymond Chandler novel of the same name. Starring Elliott Gould as Philip Marlowe, Nina van Pallandt as Eileen Wade and Sterling Hayden as her husband Roger Wade. In 2021 the film was deemed "culturally, historically, or aesthetically significant", and selected for preservation in the National Film Registry by the United States Library of Congress.

The following weapons were used in the film The Long Goodbye:

At one point in the film, Philip Marlowe (Elliott Gould) pulls a Smith & Wesson Model 10 and uses it. 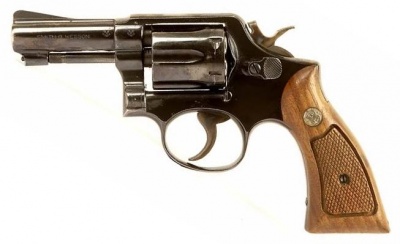 At one point in the film, Philip Marlowe (Elliott Gould) pulls a Smith & Wesson Model 10.

Marlowe with the revolver.

The Mexican chief of police carries an M1911 variant.

The police chief carries the M1911 in a holster.

There is a Remington 700 in a case on Roger Wade's office wall.

Remington 700 BDL rifle with no iron sights and scope.

The Remington 700 in the left case.

The police chief has a rifle hanging in his office.

The rifle hangs behind the police chief.

The right case on bottom, in Roger Wade's office, contains a Browning Auto-5.

The Browning Auto-5 in the right case on bottom.

The middle case, in Roger Wade's office, contains a Over and Under Shotgun.

The Over and Under Shotgun in the middle case on the right.

In one of the posters for the film, Marlowe is seen holding a Colt Detective Special, but the character is not seen with one in the film.

Marlowe holds the Colt DS. The tagline "Nothing says goodbye like a bullet" was a line in an early script, but is not actually said in the film.

In the DVD cover for the film, Marlowe is seen holding what appears to be a Beretta 92SB, but this was likely digitally added as the character never is seen with this handgun in the film and this handgun was not introduced until the 1980's. 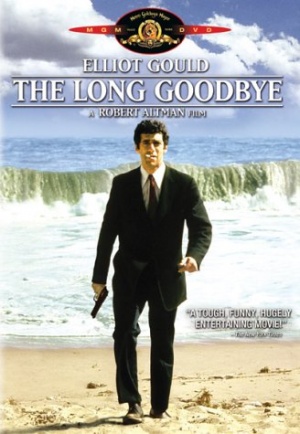 In the DVD cover for the film, Marlowe is seen holding what appears to be a Beretta 92SB in an apparent Photoshop job.
Retrieved from "https://www.imfdb.org/index.php?title=Long_Goodbye,_The&oldid=1515047"
Categories: