From Internet Movie Firearms Database - Guns in Movies, TV and Video Games
(Redirected from The Living and the Dead (Zhivye i Myortvye))
Jump to navigation Jump to search

The Living and the Dead (Russian Title: Zhivye i Myortvye / Живые и мёртвые) is a 1964 World War II drama directed by Aleksandr Stolper and based on a novel by Konstantin Simonov. The early days of the German invasion in the Soviet Union. Soviet troops have suffered one defeat after another. The Red Army retreats to Moscow. War correspondent Ivan Sintsov (Kirill Lavrov) is a witness and participant to these tragic events.

The movie was followed by Vozmezdie (1967) that shows the fate of the main characters during the Stalingrad Battle.

The following weapons were used in the film The Living and the Dead (Zhivye i Myortvye):

An officer in center desperately fires a Nagant at attacking German planes.

Lyusin holds a Nagant in holster, a sidearm of his comrade who was recently killed in action.

Sintsov carries a Nagant in holster.

A grip of Wainstein's Nagant is seen.

A grip of Maj. Ivanov's Nagant is seen.

Ivanov draws his Nagant for salute. The gun is seen blurry due to fast motion.

Tanya Ovsyannikova draws her Nagant during the surprise attack of German troops. Maj. Danilov (at the right) carries a Nagant in holster.

A grip of Gen. Seprilin's Nagant is seen.

Air Force Maj. holds a TT after parachute landing from a downed plane.

Seriously wounded downed pilot, Lt. Gen. Kozyrev fires his TT-33 at Soviet soldiers whom he confused with the Germans.

Kozyrev shoots himself with last round.

Sintsov puts the Lieutenant's pistol over a note to Lieutenant.

The Lieutenant holds his TT.

Some Soviet soldiers and officers, notably Ivan Petrovich Sintsov (Kirill Lavrov), Lt. Khoryshev (Igor Pushkaryov), Maj. Danilov (Vladlen Paulus) and Col. Baranov (Yuri Volkov), carry PPSh-41 SMGs. The appearance of these submachine guns during the events of Summer 1941 is anachronistic but during the Battle for Moscow in Autumn-Winter 1941 PPSh were really widely used.

Maj. Danilov holds a PPSh during surprise attack of German troops. He also carries a Nagant M1895 in holster.

A soldier at the left fires a PPSh.

Ivan Sintsov, currently a Sergeant, and another soldier carry a German POW on snow-covered field during the Battle for Moscow. Both are armed with PPSh-41s.

Sgt. Sintsov and other soldiers carry PPSh during the march in Winter 1941.

Soldiers with PPSh stand in formation.

Some Soviet soldiers and officers use captured MP40s during the battles in Summer 1941. German soldiers are briefly seen with MP40 in one scene.

Crewmembers of 45mm AT gun carry captured MP40s. Starshina Shestakov (Viktor Avdyushko) at the right carries an MP40 on sling and a pair of spare magazines, tucked in his belt.

A number of captured MP40s are seen in a tent during the meeting of commanders.

Soldiers stand in formation after breaking the enemy encirclement. They are mostly armed with MP40, some also carry Model 24 Stielhandgranate hand grenades.

The smooth magazine receiver is typical for early MP40s.

German soldiers with MP40s in attack.

A close view of Sintsov's MP40.

Soldiers fire at German bombers. A soldier at the foreground reloads his rifle.

One of the militsioneers (Vladimir Shibankov), who stopped Sintsov's car, carries an M91/30 rifle with bayonet, attached backwards. His comrade (Evgeniy Shutov) carries a Nagant M1895 in holster.

Soldiers of Gen. Serpilin division sleep in trench with their rifles at hand. A sentry at the background carries a rifle with attached bayonet.

A soldier with M91/30 rifle with bayonet reports to Gen. Serpilin.

Zolotaryov carries a rifle on sling.

Soldiers fire rifles and DP-27 machine gun during the battle in forest.

Malinin, still in civil dress, carries his rifle when he takes under command a unit of Moscow "Narodnoe Opolcheniye" (People's Militia).

Lyusin carries his carbine in the scene in Capt. Ivanov's tank unit.

A barrel of M38 Carbine is seen at the bottom right.

An artilleryman at the right next to AA gun carries an M38 Carbine.

A crewmember of AT rifle carries an M38 Carbine (at the right).

Some volunteers of the Moscow "Narodnoe Opolcheniye" (People's Militia) carry their personal double barreled shotguns, until these guns are replaced with military firearms.

A volunteer in center (Viktor Yakovlev) holds a shotgun.

Same shotgun is seen in center and another one at the right.

A soldier at the left carries a DP-27 during the march on forest road.

Another DP-27 is seen in same scene.

A soldier at the background carries a DP-27 during the winter march.

During the battles of Summer 1941 some Soviet soldiers use captured MG34 machine guns.

A barrel of another MG34 is seen to the right.

Several MG34, DP-27, and a Maxim M1910/30 are seen during the parade of the troops that came out of the encirclement.

A Maxim fires at German bombers.

Two DP-27, an MG34 and a Maxim are seen during the parade of the troops that came out of the encirclement.

Lt. Khoryshev (Igor Pushkaryov) and a soldier ready a Maxim.

A 61-K AA cannon is transported on a bridge at the background in Summer 1941.

AA cannons on guard of the road in Winter 1941.

PTRS-41 AT rifles are seen during the Battle for Moscow in Winter 1941.

PTRS are seen during the march.

A barrel of PTRS is seen in center.

PTRS is seen during the march.

PTRD-41 AT rifles are seen during the Battle for Moscow in Winter 1941.

Soldiers stand in formation after breaking the enemy encirclement. They are mostly armed with MP40s, some also carry Model 24 Stielhandgranate hand grenades.

152mm ML-20 gun-howitzers on march in Winter 1941. They are towed by postwar AT-S artillery tractors.

Maj. Ivanov stands on the turret of BT tank.

Destroyed Pz.Kpfw.IV Ausf.F2 tank in a wheat field near the Mogilev in July 1941. Actually long-barreled versions of the Pz.Kpfw.IV tanks entered service only in Spring 1942. Note the large number of shells hits. Maybe this tank was used as a target on the shooting range.

A closer view of same tank. 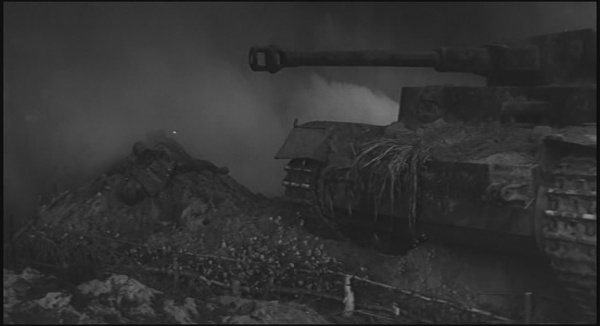 Mockups of destroyed German light tanks, built on the base of AT-P prime movers.

Destroyed German Tiger I tank can be seen during the Battle of Moscow. Actually Tiger tanks entered service only in the end of Summer 1942.

Destroyed Pz.Kpfw.IV Ausf.F2 tank is seen during the Battle for Moscow. It's the same tank, seen in the first part of the movie.

Scale models of Soviet and German airplanes are used in the scenes of aerial battle in Summer 1941. 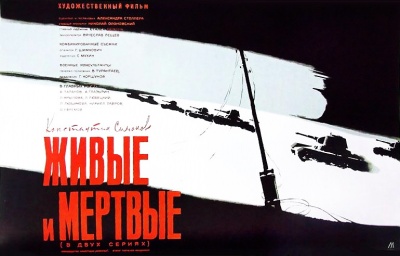