Jewel of the Nile, The

From Internet Movie Firearms Database - Guns in Movies, TV and Video Games
(Redirected from The Jewel of the Nile)
Jump to navigation Jump to search

The Jewel of the Nile is the 1985 sequel to 1984's Romancing the Stone and once again reunites Michael Douglas, Kathleen Turner, and Danny DeVito as they travel to Africa when a ruler enlists their help in locating a precious jewel that has been lost.

The following weapons were used in the film The Jewel of the Nile:

The M16A1 is used by Omar's troops on the train, most notably when they shoot through the pipes.

The Colt Sporter II Carbine is seen in the hands of the gate guards when Jack and Ralph go to Omar's palace.

The XM177E2 carbine is briefly seen in the hands of a gate guard right before the F-16 crashes through.

Lee-Enfield No. 4 Mk Is are used by the Arab tribesmen.

Karabiner 98ks are used by the Arab tribesmen.

The Uzi is seen in the hands of Omar's troops.

The Browning M2HB is seen mounted on an armored carrier when Jack and Joan escape in the F-16.

Jack uses a Leuchtpistole flare gun to destroy the F-16. 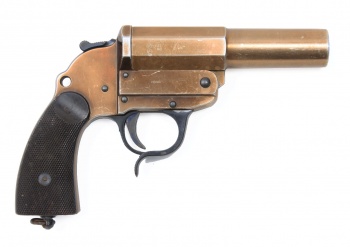 Omar (Spiros Focás) fires a M72 LAW rocket launcher at Jack, Joan and the Jewel, but ends up causing a rockslide that buries his own men.

Jack is seen firing what is supposed to be the F-16's M61 Vulcan to destroy a wall on Omar's compound. In reality, this is actually an acetylene-firing mockup.

Closeup of the F-16's M61 Vulcan. Note that this is actually an acetylene-firing mockup, similar to that used in Iron Eagle.
Retrieved from "https://www.imfdb.org/index.php?title=Jewel_of_the_Nile,_The&oldid=1391181"
Categories: