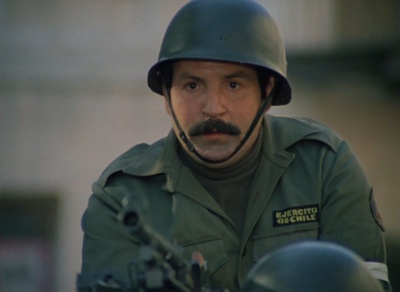 Sebastián Alarcón with a tripod mounted Browning wz. 1928 as a Chilean Sergeant in Night Over Chile (Noch nad Chili) (1977).

Sebastián Ramón Alarcón Ramírez (January 14, 1949 - June 30, 2019) was a Chilean, Soviet and Russian film director and screenwriter. In early 1970s he studied in Moscow Institute of Cinematography and after the 1973 Chilean coup d'état, Alarcón stayed to live in the USSR. In 1970s-1980s he made a series of films about the events in Chile and the fate of Chilean people. In 1990s Alarcón moved on to shooting adventure comedies.

The following lists the films in the IMFDB directed by Sebastián Alarcón: