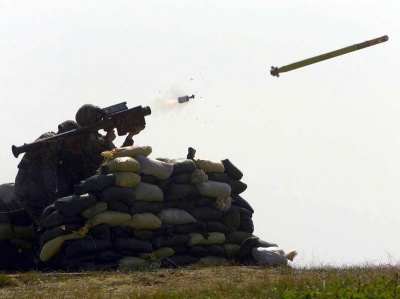 Firing a Stinger is a more complicated procedure that the "point, lock, shoot" usually depicted in media. First, the user removes the front end cap of the LTA, which protects the thin IR window in front of the missile's seeker. The BCU cap is then removed and a BCU is inserted (Stingers are not shipped with BCUs inserted, for safety reasons), then activated by pressing the gripstock's safety and actuator switch forward, outward and downward, then releasing it. It takes 3-5 seconds for the BCU's thermal battery to warm up and the supply of liquid argon to cool the missile's seeker before the launcher is ready to track a target, during which time a whine can be heard as the internal gyros spin up. From the time of activation, the BCU can power and cool the missile for 45 seconds: if the weapon has not been fired within this period, a new BCU will have to be inserted and activated. The missile's flight time is not part of this time limit and once launched it runs on its own internal battery.

The user begins the lock-on procedure by pointing the Stinger's iron sight at an empty area of sky, since the launcher uses negative contrast to detect potential targets. The target is then held within the circle defined by the front sight until the Stinger generates a lock-on tone: this is delivered through two means, a small but loud speaker mounted on the sight right next to the gunner's ear, and a vibrating pad that presses against the gunner's cheek in case they cannot hear the speaker. If a lock is not immediately acquired, swinging the sight on and off the target or in a figure-eight motion crossing over it is used. When the lock has been acquired, the user presses the uncaging switch near the front of the gripstock (which should make the lock-on tone louder), applies lead and superelevation, and then while still pressing the uncaging switch, holds their breath and pulls the trigger to fire the missile. There is a slight delay between pulling the trigger and the missile actually launching. The reason for the gunner holding their breath is not for bracing, but because the toxic exhaust plume from the first-stage flight motor igniting can easily envelop the launch location.

On launching, the IR window at the front and bursting disc at the rear of the tube are both blown out. The Stinger is ejected from the tube by a small launching motor which is still burning as it exits, which is why the sight includes a plastic panel to protect the gunner's left eye: it is not uncommon for Stinger gunners to wear gas masks for firing exercises to protect them from heat wash and toxic exhaust fumes. The launch motor breaks away from the missile as it exits the tube and hits the ground some distance in front of the launcher. A lanyard connects the launch motor to a shorting plug in the missile's main flight motor arming circuit, and pulls this plug out as it detaches: the missile travels about 29 feet before its first-stage engine ignites. The two stages consist of a main flight motor and sustainer motor which together accelerate the missile to about Mach 2.5. The missile does not begin to manoeuvre until it has travelled 660 feet (200m), meaning it would only be effective against a totally stationary target like a hovering helicopter any closer than this. Stinger typically has a maximum flight time of 15-19 seconds: if it has not hit something before this, the missile will self-destruct. FIM-92C Stinger-RMP has a quoted maximum range of 5 miles (8km) and can engage targets at altitudes up to around 10,000 feet (3km).

After firing, the BCU is removed and discarded, the IFF interrogator disconnected, and the IFF antenna stowed: when time permits, the gripstock is detached from the spent LTA. The LTA can be discarded, but is typically destroyed in some expedient manner (this practice comes from US experience with discarded LAWs being packed with explosives and used as boobytraps in Vietnam).

While Stinger is a soft-launch weapon, this is relative to the main flight motor's power and it is certainly no "cold" launch. In combat the backblast danger zone from firing is 50 feet (15m) for personnel and 16 feet (5m) for equipment, and it is dangerous to fire the weapon at elevations greater than 65 degrees due to the backblast potentially injuring the user's legs. It is also dangerous to handle the BCU by anything but the handling ring for 30 minutes after use, as the cartridge heats up to 400 degrees Fahrenheit 3-5 minutes after activation due to the operation of the thermal battery: it must be removed before this time to avoid damage to the gripstock.

4-round Stinger Standard Vehicle Mounted Launcher on M6 Bradley Linebacker - 70mm. All box launchers were removed from M6s in the period from 2005-2006 due to a lack of airborne threats in Iraq and Afghanistan. There were plans to re-add them to an updated counter-UAV M6 called the M-SHORAD which also mounted the XM914 30mm autocannon, a variant of the M230 Chain Gun, but in 2018 the US Army decided to instead base this system on the Stryker chassis. 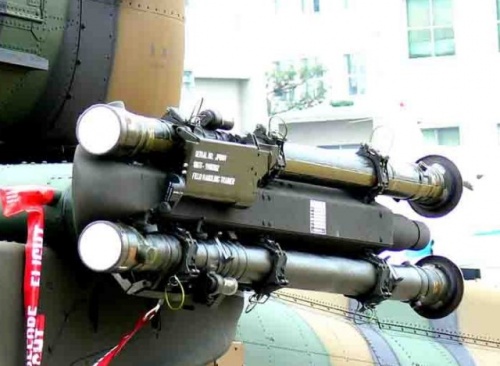 Would using this weapon as a conventional rocket launcher work in real life?

As others have said, it's a proximity explosive warhead designed to take down aircraft. Now in the film Navy SEALs they used it as a last ditch weapon against an armored vehicle, but I hope people don't start thinking of it as an anti tank weapon. A total waste of a VERY expensive rocket......MoviePropMaster2008 02:37, 13 February 2011 (UTC)

Minor correction: IIRC the Stinger is a "hittile" like Rapier that doesn't use a proximity fuze. He's probably thinking of videogames; Metal Gear Solid is the chief offender, where you have to take down a giant walking tank by firing Stingers at it. Vangelis 09:28, 13 February 2011 (UTC)

Should this be moved to "FIM-92 Stinger", as the FIM-92A is just the first of 5 variants of the missile, with the outward appearance of the launchers being identical. Also, does anyone know what the "M" designation for the launcher itself is, like how the launcher for the FIM-43 Redeye is the M41A1? --commando552 04:27, 27 July 2012 (CDT)

Does anyone know the differences of other designated Stinger Variants. Probably for different launch platforms, I'm not sure

By designation do you mean the difference between the FIM-92A and the other letter designations such as FIM-92B? If so, I don't think there is any external difference on the launcher itself, the only difference is on the missile, with improved warheads, motors, seekers and software. Bear in mind that the designation of FIM-92A (or whatever letter up to G I think) is for the missile itself, the launcher has a different designation. So for example even though there is not launcher resembling what you would think of as a Stinger MANPAD on vehicles like the Avenger or Linebacker, you would still say that they are armed with FIM-92Bs as this is the missile itself. I don't know what the designation is for the MANPAD launcher system, but similarly for its predecessor the Redeye the missile is the FIM-43, whilst the launcher itself is designated as the M41A1. --commando552 (talk) 08:09, 7 January 2013 (EST)

Eh, it's only three of them that are about the firing mechanics. And it's mainly because it's basically a certainty that any given piece of media will get literally everything there wrong. Edit: yeah, it is a bit excessive, I've shifted the big middle section to the top of the talk page. Evil Tim (talk) 20:50, 19 December 2017 (EST)

Actually, I do have a question. When you state that the BCU gives the weapon a "45 second supply of power", what part of the weapon's operation is limited to 45 seconds? Do you have 45 seconds to fire the weapon once the battery is inserted and activated? Can you only hold a lock for 45 seconds? I'm not quite sure what this is supposed to mean. Pyr0m4n14c (talk) 21:10, 19 December 2017 (EST)

It's a thermal battery and a small pressurised gas tank that provides power to the missile seeker and cools it (IR seeker electronics have to be very cold to function). Stinger needs to lock on using the seeker that's actually on the nose of the missile (hence being able to aim an IR-guided weapon with iron sights). So yeah, it's 45 seconds to fire once the BCU is activated, otherwise you have to toss it and start over. The missile has its own integral battery for when it's actually left the launcher. Evil Tim (talk) 21:17, 19 December 2017 (EST)

Okay, thanks for the help. Considering all of the steps involved (and thus all of the things that one could accidentally forget), coupled with a time limit, that seems like a lot of pressure. I mean, obviously some of that is dealt with through training, but still. I can only imagine the kind of bullets someone would be sweating trying to set this thing up and use it, especially with the added pressure of there being an enemy aircraft nearby. Well, I guess that's war for ya. Cheers, Pyr0m4n14c (talk) 22:39, 19 December 2017 (EST)

Yeah. Javelin works like this too and has the added fun that you can't replace the BCU because it's part of the LTA, but the BCU on Javelin lasts for four minutes after activation rather than 45 seconds and the CLU has its own battery so you don't need to activate the BCU to have all your neato modern targeting scope functions. But I think the biggest balls of brass requiring weapon was the Dragon, where you had to remain in a seated position for up to 11.5 seconds guiding it after kicking up a huge pall of smoke to tell everyone where you were. And knowing you probably weren't going to hit what you were shooting at because Dragon was terrible and had an 80% miss rate under combat conditions. Evil Tim (talk) 23:03, 19 December 2017 (EST)