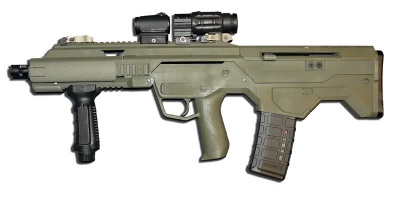 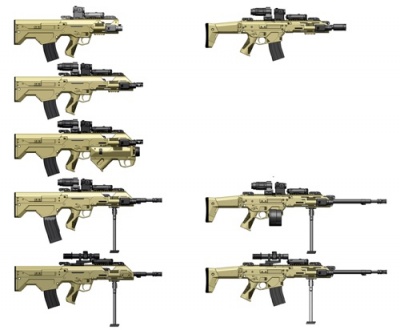 I was wondering whether we should refer to the MSBS as the "Radon". As far as I know, it was a name that won a contest hosted by a Polish magazine (can't remember which), but the creators of the rifle never referred to it as such. Officially it's still the "MSBS 5,56", with Radon being a fan-made nickname. Tanaj (talk) 09:51, 20 March 2014 (EDT)

It was "Strzal" magazine. You're right - "Radon" is not an official name for MSBS (though the contest was held with cooperation from FB Radom). Most gun magazines/portals, and FB themselves, refer to the gun as "MSBS-5,56K/B/R". "K" stays for "kolba" (stock) or "konwencjonalny" (conventional), "B" is for "bezkolbowy" (stock-less - bullpup) and "R" for "reprezentacyjny" (representational - variant for our honor guard). To add a bit of spice the 16" barrel variant of MSBS-5,56K is developed under military-funded program "MSBS", while short-barreled variant, LMG, DMR and MSBS-5,56B variants are developed under "MSBS-5,56 RAWAT" program funded by our Ministry of Science. "RAWAT" is made from words "Radom" (city of manufacturer) and "WAT" (Military Institute of Technology in Warsaw). MSBS-5,56R was private initiative of FB Radom and (oh irony!) have biggest chances to be actually fielded (our honor guards use 50 years old SKS rifles). Chris22lr (talk) 16:04, 27 August 2014 (EDT)

Differences between MSBS and ACR

Internally speaking, the ACR is akin to an AR-15 while the Radon is similar to a G36, they just happen to look almost the same but one can notice the various external parts, the MSBS has a different takedown lever and placement of screws AND charging handle (ACR = on the handguard, MSBS = on the reciever).--Death Shadow20 (talk) 08:30, 9 December 2016 (EST)

(Many years later) It's actually wrong, I'm pretty sure the MSBS doesn't have a burst setting. This is a mistake on the English version of the FB website, while the Polish version got the info right. By looking at the selector, there are only safe/semi/full-auto positions, and there's no mention of a burst mode in the MSBS manual (or at least there doesn't seem to be; I ain't gonna Google-translate the whole thing :P). Someone corrected the info on the MSBS page a while ago, though I thought I'd point that out here. --Ultimate94ninja (talk) 13:39, 5 February 2022 (EST)

Not only the name changed from "Radon" to "GROT", but got a over-complicated designation sistem: C,R,B : classic,representative or bullpup 10,16,20 : barrel lenght G,M,PS: if is configurated as "grenadier",IAR or marksman rifle. FB: name of manufacturer Mx : x stands for number of series.

So in this case the name of standard MSBS-K become C16FB-M1.

Eh, MSBS is still the name of the whole series, might as well keep it here. Make redirects for the specific model names if they appear in anything. Evil Tim (talk) 00:41, 1 October 2017 (EDT)