Straight Shooter is a 1999 German action thriller. A German who is a former French Foreign Legion sniper starts terror against politicians and industrialists whom he blames for the death of his daughter after the nuclear power station incident. Now the only man who can stop the Straight Shooter is his former instructor and commander.

The following weapons are seen in the movie Straight Shooter:

A view at the sound suppressor. 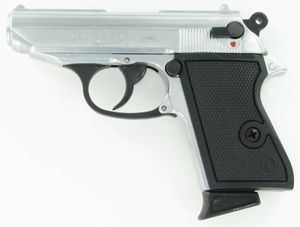 He tries to fire her pistol only to find that it isn't loaded. Note that there is no Walther logo on the slide which is a confirmation that the pistol is Kimar model.

In the flashback scene Frank Hector (Dennis Hopper) fires an M1911-style pistol at an African rebel.

Several members of a counter-terrorism unit are armed with SIG-Sauer P225 (or SIG P6, if real German police helped to film the movie) pistols. 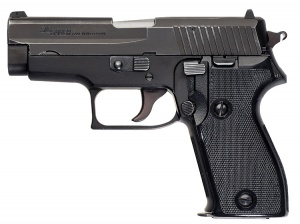 SIG-Sauer P6 - 9x19mm - note the cutaway hammer, this was used to allow West German police to know whether or not a gun was dropped on its hammer.

A member of a counter-terrorism unit holds a pistol fitted with some device, supposedly a laser sight.

A member of a counter-terrorism unit aims his pistol.

A member of a counter-terrorism unit holds his pistol at the background.

A police detective holds a pistol.

Various characters are seen with pistols.

A pistol is seen in the holster of a bodyguard. The shape of the grip matches Beretta 92F but but it's not enough to identify the pistol for sure.

A member of a counter-terrorism unit holds a revolver. It is seen very blurry. The revolver resembles Smith & Wesson Model 66.

In the flashback scene most of French Foreign Legion carry MAT-49 SMGs.

A legionnaire fires his MAT-49.

A close view at the SMG.

In the final scene several members of a counter-terrorism unit are armed with Heckler & Koch MP5 submachine guns. The stock is never seen so it's hard to identify if it is A1 or A3.

The MP5 is fitted with some device, supposedly a laser sight.

A member of a counter-terrorism unit on the top of the stairs holds some compact SMG with a front grip (maybe a Steyr TMP). The weapon is fitted with some device, supposedly a laser sight.

Winchester 1300 shotguns are used by a counter-terrorism unit in the final scene.

A member of a counter-terrorism unit holds a shotgun with long magazine tube at the background. The pump is fitted with a loop.

A police detective aims a shotgun. Another detective holds his shotgun of the same model at the background.

A shotgun is seen at the left.

Mossberg 500 shotguns are used by a counter-terrorism unit in the final scene.

A member of a counter-terrorism unit fires a shotgun to breach the door.

A shotgun is seen at the foreground.

An AKS-47-style assault rifle is seen in hands of an African rebel in the flashback scene.

In the opening scene a hunter aims at a deer with an ornamented rifle.

The first weapon used by Volker Bretz (Heino Ferch) is a sniper rifle that appeares to be a Mauser SR-93. In the movie it is called an FR F2 in 7.5 mm caliber (which is is incorrect because FR F2 was chambered for 7.62x51 mm while a 7.5x54 mm rifle was MAS FR F1).

A pistol grip, a part of receiver and a sniper scope can be seen.

The stock can be seen.

The safety and the bolt handle.

A side view at the weapon.

In the final scene Frank Hector (Dennis Hopper) is armed with a GOL sniper rifle.

In the final scene a lot of various sniper rifles are seen in hands of snipers of the counter-terrorism unit.

A sniper aims his rifle.

Two snipers with different rifles on the rooftop.

Two more snipers with their rifles. The rifle with a bright wooden stock resembles Anschütz models like Models 1903 or 1913.

Two more snipers at the right run with their rifles in hands.

An unidentified machine gun is seen in the flashback scene. It resembles a MAS AA-52 but it's only a guess.

A bundle of grenades.

Bretz readies to throw the grenades.

The grenades in flight.

During the shootout on the abandoned factory Volker Bretz (Heino Ferch) destroyes a police car with a single shot rocket launcher.

He unfolds the tube.

A flamethrower is used by French Foreign Legion in the flashback scene.

A legionnaire carries two cylinders at his back.
Retrieved from "https://www.imfdb.org/index.php?title=Straight_Shooter&oldid=748608"
Categories: