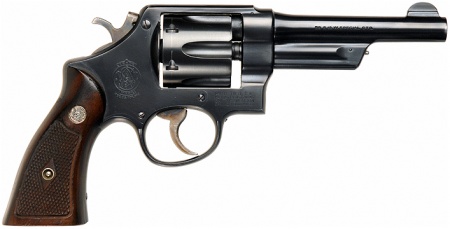 The Smith & Wesson Model 20 was a revolver (chambered for .38/44, a more powerful version of the .38 Special and the predecessor to the .357 magnum) designed on the large N-frame. At the time of its introduction the large frame was commonly referred to as the "44 frame" - hence the caliber being designated 38/44. Meaning the cartridge should only be fired in the 44 framed "Heavy Duty". It was in production between 1930 and 1966. It is commonly mistaken for a Model 10 in movies and television shows, however, the frame is quite a bit larger. Before Smith & Wesson went to numbering its different models in 1957 the Model 20 was called "The Heavy Duty ". This hard-shooting hybrid came about, indirectly, due to Prohibition, and the corresponding rise of organized crime. With the stock market crash in 1929 and the onset of the Great Depression, the United States found itself dealing with a modern version of the 19th century outlaws. Only the 20th century outlaws embraced modern technology such as the automobile, modern body-armor and automatic weapons. American law enforcement quickly realized that .38 Spl. revolver, which fired a 158-grain, round-nose bullet with an average muzzle velocity of 755 f.p.s., was no match for the bank robbers/motor bandits wearing “bullet-proof” vests and driving steel-bodied cars. Answering the calls for greater stopping power, Smith & Wesson responded with what could be called the .38 Spl. +P/+P+ of its day, an amped-up .38 Spl. that fired a 158-grain bullet with a muzzle velocity of 1175 f.p.s. and 460 feet-pounds muzzle energy, enough to punch through both sides of an automobile. Other .38/44 High Velocity bullet weights were soon commercially offered.

The .38/44 Heavy Duty was the only S&W revolver rated to fire the new loads. It was introduced in 1930 with a fixed sight, 5-inch barrel, blued or nickeled finish, and walnut stocks, though 4- and 6½-inch barrel lengths were eventually offered. (A .38/44 Outdoorsman, sporting target sights and a 6½-inch barrel, was brought out in 1931.) Production of the .38/44 Heavy Duty was halted in 1941, due to the demands of World War II, but was resumed in 1946. It became the Model of 1950 four years later, the Model 20 in 1957 and was finally discontinued in 1966, with a total post-war production of 20,604 revolvers. By the mid-60's the ,357 Magnum revolver had become readily available to shooters and could fire all types of 38 Special loads as well as magnums. The need for a heavy 38 Special revolver had passed. For many years after the model was discontinued it wasn't uncommon to find the large revolvers for sale at very reasonable prices. That is not the case anymore. The various 34/44 Smith & Wesson revolvers are now popular collector handguns. Shooter grade models can command prices north of $700 while Excellent grade versions will often sell for around $1,200....and higher depending on the market.

The Smith & Wesson Model 20 was seen in the following: