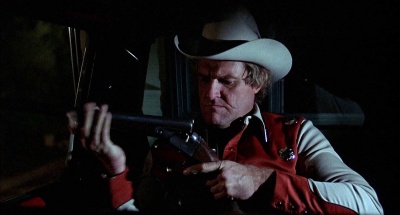 Charles Napier (1936-2011) as Tucker McElroy loads up his Double Barreled shotgun in The Blues Brothers.

Charles Napier (April 12, 1936 - October 5, 2011) was an American character perhaps best known for his villainous roles in such films as The Blues Brothers and Rambo: First Blood Part II and in numerous guest-starring roles on television. He appeared in several Russ Meyer films early in his career. He served in the 11th Airborne Division from 1954 to 1957.