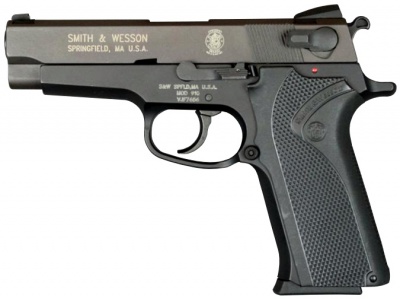 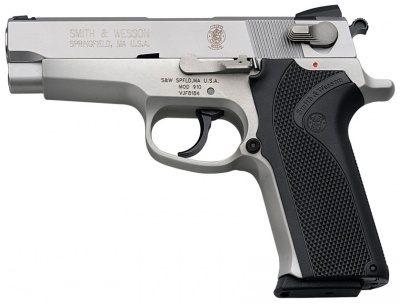 The Smith & Wesson 910 is the successor to the Smith & Wesson 915 and fills the niche of being a budget variant of the Smith & Wesson 5900 pistol series. It primarily differs from the 915 in that the it comes as standard with a restricted 10 round magazine as opposed to the original 15 round magazine to comply with laws in certain states, hence the name. It can also be differentiated by the design or its three-dot plastic sights, and by the cruder machining on the slide (rather than featuring the large curved, scalloped portion at the front of the slide as in the 915, the 910 has a smaller straight chamfer). As standard it has an alloy frame and carbon steel slide, but it is also available in the Smith and Wesson 910S variant which features a stainless steel slide.

The Smith & Wesson 910 and variants can be seen in the following films, television series, video games, and anime used by the following actors: