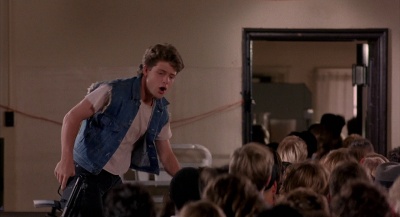 Sean Astin as Billy Tepper with the SP89 in Toy Soldiers.

Sean Astin is an American actor whose notable roles include Mikey Walsh in The Goonies, the title character in Rudy, and Samwise Gamgee in The Lord of the Rings trilogy. He also is the son of actress Patty Duke and the adopted son of actor John Astin.