The following weapons were used in the film Savior:

The Beretta pistols seen in the Parisian mosque shooting scene are presumed to be the M9 model, since both Joshua Rose/Guy (Dennis Quaid) and Peter Dominic (Stellan Skarsgard) are US government officers and thus having the right to carry them. A Beretta 92FS is also seen in the hands of the wounded Muslim who is shot.

A wounded Muslim raises his own Beretta 92FS on Joshua Rose. 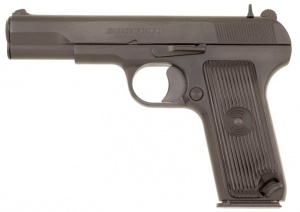 A UN peacekeeper armed with a G3A3 Rifle.

Guy is trained on a Vektor R4 modified for the Designated Marksman role when he joins the French Foreign Legion that he uses throughout the film. This weapon would be accurate for the Bosnian Serb military which purchased a few thousand R4 rifles during the conflict, but not for the French Foreign Legion. The modifications include a scope mounted on an AK-style receiver mount (the original Galil scope mount notch was replaced by a lightening cut on the R4) along with a cheek rest which has been installed on the original folding stock and removal of the sights.

Guy holds the modified Vektor R4, while looking through the scope.

Guy uses a rope tied around a beam to steady his aim.

You can view the S-A-R trigger group here. This, the skeletal stock, and the 5.56mm curved magazines rule out the 7.62mm Galil Sniper Rifle.

Guy fastens the Scope to his rifle. Note slightly inclined bottom of the hand-guard that is only found on the R4.

Guy removes the scope when he is uses the rifle in close quarters.

The movie takes place in Bosnia during the Yugoslavian Civil War, and thus many Yugoslavian or possibly Russian weapons can be seen in the movie. Some of the militias appear to be armed with the Zastava M59/66 (local copy of the SKS rifle).

The Zastava M70AB2 rifles are used by Bosnian Serb, Bosniak, and Croat soldiers throughout the film. Peter Dominic also is armed with a Zastava M70AB2.

A Bosniak soldier rushes with a Zastava M70AB2 before being killed by Guy.

Marine Security Guards at the US Embassy in Paris are armed with M16A2 Rifles.

M16A2 -5.56x45mm NATO - It is more likely being that the Paris Scenes were filmed in Canada that the Semiautomatic HBAR was used instead of the M16A2.

A Marine Security Guard at the US embassy in France regains his composure after the car bombing.

The MP5A2 is used in the film by the Bosnian Serb soldier Goran (Sergej Trifunovic).

Goran stands in the doorway with his MP5A2.

The Zastava M53 (Yugoslavian version of the MG42) is seen in Peter's MG Nest. While there are no definitive features to definitively say this is an M53, the film was shot in Montenegro, were it would be reasonable that it's a locally available M53.

A UN peacekeeper can briefly be seen manning a PK Machine Gun at the prisoner exchange.

A UN peacekeeper mans a PK Machine Gun as Goran jokingly throws a hand grenade at them. 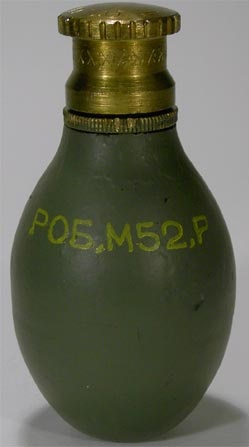 A grenade falls through the camo netting on Peter's MG Nest.

The same type of grenade is carried around by Vera's Brother.