Savages is a 2012 narco-thriller directed by Oliver Stone and based on the novel of the same name by Don Winslow (who co-wrote the screenplay and was also the author of The Life and Death of Bobby Z). The film follows two successful marijuana-dealing friends: Chon (Taylor Kitsch), a former Navy SEAL, and Ben (Aaron Johnson), a UC Berkley graduate who must fight back against the Baja Cartel, run by Elena La Reina (Salma Hayek) and her enforcer Lado (Benicio del Toro), who have kidnapped their girlfriend O (Blake Lively) in order to push them out of the business.

The following weapons were used in the film Savages:

Chon (Taylor Kitsch) briefly handles a Glock 21 in the beginning of the film. The Glock 21 has a carbon fiber pattern frame; the weapon used in this movie is the same one originally used in Faster. 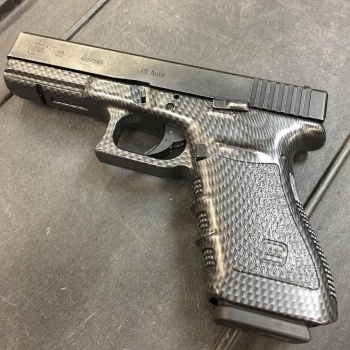 A 3rd Generation Glock 21 with a carbon-fiber frame and extended magazine release - .45 ACP. The weapon pictured here is the actual screen-used Glock 21 from the film; this image was posted to the Instagram account of Independent Studio Services (ISS), which provided the guns used in the film.

Chon (Taylor Kitsch) with his Glock 21. While the lighting makes it hard to tell in this image, the Glock has a carbon fiber pattern on the frame and an extended slide release, both modifications made for use in the movie Faster.

Both Dennis (John Travolta) and Lado (Benicio del Toro) carry what appear to be Glock 22s.

Chad (Shea Whigham) is threatened with the M1911A1.

Esteban with the Model 36.

Chon's sidearm during the final showdown appears to be a custom SIG-Sauer GSR. 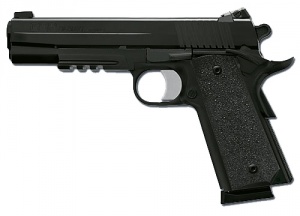 The GSR is seen being cleaned at the film's beginning.

Chon with the SIG.

At the film's beginning, Chon (Taylor Kitsch) is seen spinning the cylinder of a Ruger LCR. The novel states that he pulls out a ".38" when the Cartel asks him if he has a gun on hand. While the exact make and model of his sidearm is not described in the novel, it could possibly be an LCR, since the LCR comes in .357 Magnum and .38 Special. 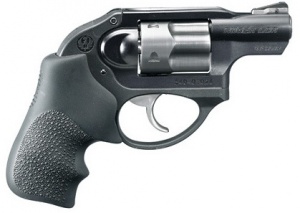 Chon with the LCR.

Chon also is seen holding what appears to be a SIG-Sauer P232. 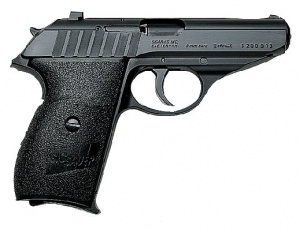 Elena wanted to shoot Lado for betraying her, but Lado (Benicio del Toro) was faster. 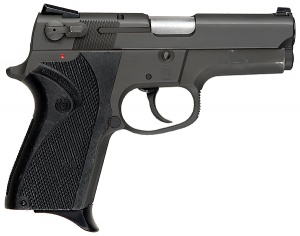 Ben (Aaron Johnson) explains to O how the gun works, so she can cover herself during the firefight with the cartel.

Another shot of O holding the Smith & Wesson 6904.

Another shot of Ben brandishing his P30.

A cartel member disguised as a motorcycle cop (Sala Baker) is seen using a stainless Kahr K9 fitted with a suppressor. 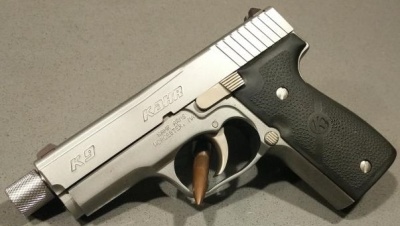 The suppressed pistol in the disguised patrolman's hand.

An FN P90 is seen in the hands of a cartel soldier when Chon and Ben take down the money transport.

A Heckler & Koch MP5A3 is seen among the arms displayed during a DEA press conference.

An unknown pump-action shotgun is briefly seen in the hands of a cartel soldier.

During the money hijacking scene Chon and his team of ex-Navy SEALs use heavily modified Colt Model 933 rifles, fitted with Yankee Hill 9638 free-floating continuous rail forearms, ACOG scopes, Steiner DBAL laser designators, and Grippod vertical foregrips. The M933s from this movie had previously appeared in The Unit and were later used in Triple Frontier, albeit with a different accessories configuration.

Another still with the M933 from behind Chon.

Good side view of the M933. Note the Grippod vertical grip.

View of the business end of the M933.

An AR-15 is seen in the hands of a cartel soldier.

A Nemesis Arms Vanquish is seen used by another one of the former SEALs during the final showdown.

The cartel snipers use SIG-Sauer SIG556 DMRs during the final shootout.

Better closeup of the receiver.

Another sniper rifle which is used by Chon's ex-Navy SEALs appears to be an M14 SOPMOD.

During the money hijacking of the cartel, one of Chon's ex-Navy SEALs use an RPG-7 to take out a cartel vehicle.

An RPG-7 is prepared to be fired.
Retrieved from "https://www.imfdb.org/index.php?title=Savages&oldid=1495129"
Categories: