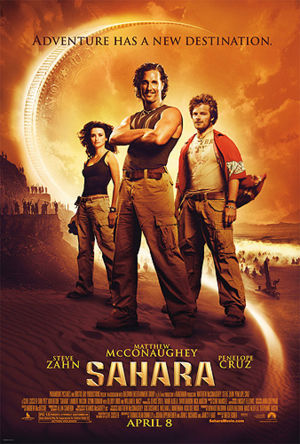 The following weapons were used in the film Sahara (2005):

A Browning Hi-Power can be seen in the hands of Kazims' Troops and later commandeered by Dirk Pitt (Matthew McConaughey).

Al Giordino (Steve Zahn) can be seen wielding a Walther PPK in the film, most notably when he is disarming himself when confronted by the Tuareg.

Al Giordino (Steve Zahn) holds up his Walther PPK while dropped his guns on the road.

Yves Massarde (Lambert Wilson) gives a matched pair of Flintlock Pistols to General Kazim (Lennie James) at his palace. They are a dueling set with silver caps at the bottom of the grips and have other inlaid silver accents. It is mentioned that they were formerly the property of "General Mayenne" causing Kazim to quip that they must have killed 'The Comte de Vézelay' (French for The Count of Vézelay, in the Bourgogne region of France. Though there is no famous Count from that area, it is most known for holding the abbey where the bones of Mary Magdalene were brought.)

A Sterling SMG is seen held by Tuareg horsemen in the desert.

The Heckler & Koch G36K is carried by one of Yves Massarde's guards and one of Kazim's soldiers in the climax.

One of Yves Massarde's guards with a Heckler & Koch G36K.

The Chinese Norinco Type 56-1 under-folding stock version of the AKS-47, can be seen in use throughout the film. Mostly a mix with other AK types, carried by Kazims' Troops.

Some of the Tuareg horsemen also carry Lee-Enfield No. 1 Mk III* rifles.

A Tuareg fighter to the left of the bazooka is seen with a Lee-Enfield No. 1 Mk III* rifle in his hands.

The Colt M4A1 Carbine can be seen in the hands of one of Kazim's soldiers, riding in the pickup truck that takes a handcuffed Dirk Pitt and Al Giordino across the desert.

The Guard holding an M4 Carbine listens to the endless chatter of his driver.

One of Tuareg fighters who help Pitt and Giordino raid the waste plant carries what appears to be an original milled receiver AK-47.

Mixed in amongst the AK-47 rifles are AKMs, many of which are modified with 'tribal' decorations.

A nice 'rubber stunt' AKM with Tuareg decorations - note that the rubber cast wooden buttstock has the bloodgroove of the AK-74 but the rifle is cast from a 7.62x39mm gun

The FN FAL is seen carried by General Zateb Kazims' armored troops at the final battle (in addition to the plethora of AK-47 type rifles). They look to be the solid Metric style front sight block, however the barrels seem shorter than usual, so the exact model is unknown, but they appear to be Metric FALs - 7.62x51mm.

The L1A1 is used by a Mali sniper with a scope, but later commandeered by Al Giordino (Steve Zahn).

Steve Zahn holds an L1A1 in the truck.

It appears that Al's rifle during a desert battle is a Romanian WASR-3 Rifle built at the S.C. Uzinele Mecanice Cugir S.A. (Cugir Factory) in Romania. The weapon probably came from a foreign armory, but for the purposes of identification, the U.S. version of the Romanian .223 AK will be identified. The Romanians exported a series of three AK type rifles called the SAR series.

The SAR-1 was 7.62x39mm, the SAR-2 was 5.45x39mm and the SAR-3 was the 5.56x45mm. Then a later variant was imported, the WASR. The WASR was essentially the same firearm, but with a lower grade of fit and finish. (The original WASRs were imported to take only single stack magazines (to please BATF) and the wholesalers opened up the mag well to take standard magazines and replaced some of the parts with U.S. Made parts to make them legal). Like the SAR series, the WASR-1 was 7.62x39, the WASR-2 was 5.45x39mm and the WASR-3 was 5.56x45mm. However, the SAR-3 rifle has the original AK74 style gas block, the WASR-3 has a modified AKM style gas block and blonde wood. Both the SAR-3 and the WASR-3 take the ROMAK 223 magazine (Wieger style). This rifle is set up with the Wieger style magazine. Al Giordino's rifle is a WASR-3 (or the European equivalent) and of course, his is fully automatic. It looks to be the same rifle used in the movie Casino Royale since the Sascha Robey was the armorer for both movies.

A U.S. imported Romanian WASR-3 rifle that had the thumbhole stock replaced with a laminated buttstock and US made synthetic pistol grip (for legality) - 5.56x45mm

Seen in the historical flashback sequence at the beginning of the film, many rifle are seen from a distance, but it is hard to identify them since the battle is at night and the only time we see long rifles, the soldier holding them is being blown up by cannon fire.

Union Soldier holds a rifle while running from cannon fire from the CSS Texas.

When Kazim's troops are mobilizing, a soldier walks by carrying a pump-action shotgun, of a yet undetermined make and model.

Unknown shotgun in the center.

The M249 SAW is seen carried by General Zateb Kazims' armored troops at the final battle, identified from minimi due to heatshield and solid stock.

soldier in the background has a M249.

The FN MAG-58 machine guns are seen mounted on trucks and boats, all manned by Kazims' troops.

Soldier guards the palace with a PKM (slung). The soldier checking the papers is holding a Norinco Type 56-1 under-folding stock AK rifle.

Soldier walking past Yves Massarde has a PKM.

The Browning M2HB is mounted on the APCs used by Kazim's Armored troops.

An M20B1 "Super Bazooka" is carried by Tuareg tribesmen in the desert battle.

Tuareg fighter on the right holds an M20B1 "Super Bazooka".

When Kazim's troops are mobilizing, a soldier walks by carrying an M79 grenade launcher.