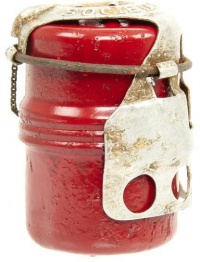 The SRCM Mod. 35, along with the OTO Mod. 35 and Breda Mod. 35, was part of the Italian Modello 35 series of hand grenades, nicknamed "Red Devil" hand grenades due to their coloration. They were used by Italy from WW2 well into the 1980s. All three grenades were impact detonated, and each had three variants: a basic high explosive variant in red, a smoke incendiary variant (FI) in yellow, and a practice variant in white. Postwar grenades had khaki colored body with colored lines scheme for the various versions.

The SRCM Mod. 35, made by Società Romana Costruzioni Meccaniche, is the most refined of the series, featuring a fail-safe mechanism that would render the grenade inoperable should it misfire.

The SRCM Mod. 35 and variants can be seen in the following films, television series, video games, and anime used by the following actors: 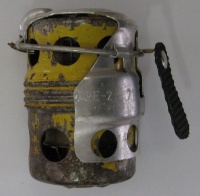 This is the smoke incendiary variant which can be identified by the yellow color and the holes in the body. It also has an impact fuse.
There are two variants of the smoke grenade.

The SRCM Mod. 35 FI and variants can be seen in the following films, television series, video games, and anime used by the following actors: