SA-18 Grouse is the NATO reporting name of the Russian MANPADS 9K38 Igla (Russian: Игла́, "needle"), a highly improved and upgraded version of the SA-7 Grail and is the current shoulder-launched SAM (Rus. ПЗРК) for the Russian and former Eastern bloc armies.

The SA-18 Grouse and variants can be seen in the following films, television series, video games, and anime used by the following actors: 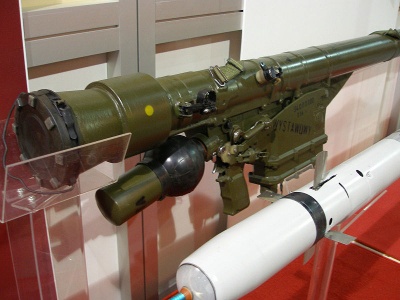 The PPZR Grom (PPZR stands for Przenośny Przeciwlotniczy Zestaw Rakietowy, or "Anti-Aircraft Rocket-Propelled Set" while "Grom" means "Thunder"), is a surface-to-air missile developed in Poland. During the 1980s, Poland planned to replace their old SA-7 Grail with a more modern system, but political turmoils (and the fact that Poland left the Soviet Bloc in 1990) left Poland without any modern MANPADS. The Soviet Union decided not to give Poland the licenses for the SA-18 Grouse, but in the turmoil of the Soviet Union's dissolution, the Polish intelligence system was able to acquire the SA-18's original design plans, using them to develop the Grom.

The PPZR Piorun ("Piorun" being Polish for "Lighting Strike") is an improved version of the Grom developed in the 2010s.