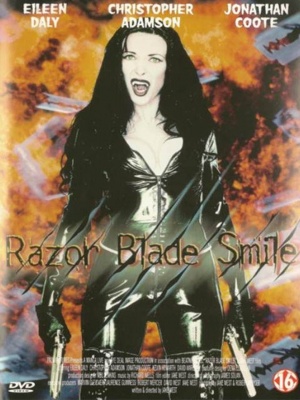 Razor Blade Smile is a 1998 low budget British Horror/Action film about a female vampire assassin. It is the story of Lilith Silver, a 19th century English woman, who has become one of the undead, after she has tried to stop a duel between her then-lover and Sir Sethane Blake, a vampire. In 1990's London, she acts as a hired killer who has taken up an assignment to eliminate a group of elite businessmen, 'The Illuminati', who are conspiring to take control over business and government. During this assignment, her path again crosses that of Sir Sethane Blake, leading to a surprising climax.

A 16mm indie film in the tradition of El Mariachi and The Evil Dead, it was shot on a total budget of US$ 27,500 (!). For this reason, it is not surprising that most of the guns used in the movie are either blank firing guns or plastic dummies. Razor Blade Smile came out in 1998, the same year as Blade, but the similarities do not end here. Both movies tell the story of a lone, leather-clad hero who fights a shadow-war with a mighty opponent, using samurai swords and lots of guns.

The following guns were used in the film Razor Blade Smile:

A Bruni 1911 blankfire replica of the M1911 is the weapon of choice for both Lilith Silver (Eileen Daly) as well as Illuminati thugs. It's also briefly seen in the hands of Lilith's lover Platinum (Kevin Howarth). 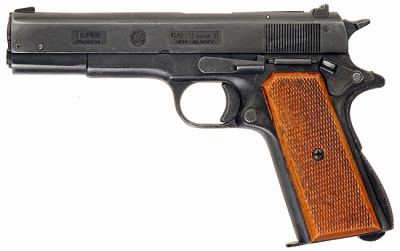 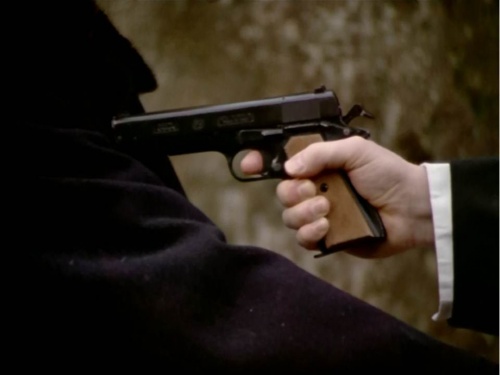 In this shot, the Bruni 1911 can be easily identified by the characteristic grips and Bruni inscriptions on the slide. 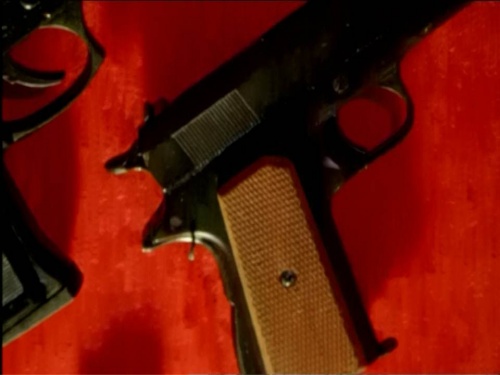 Good shot of the crude plastic grips of this weapon. 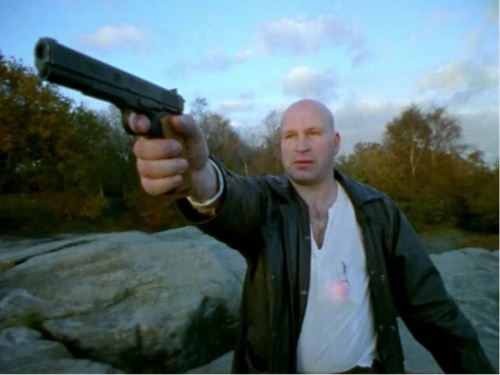 Illuminati thug aiming his Bruni 1911 at Lilith, just a second before she hits him in the chest. Note the 'fake blood' that's about to explode under his shirt, mimicking the impact of a bullet. 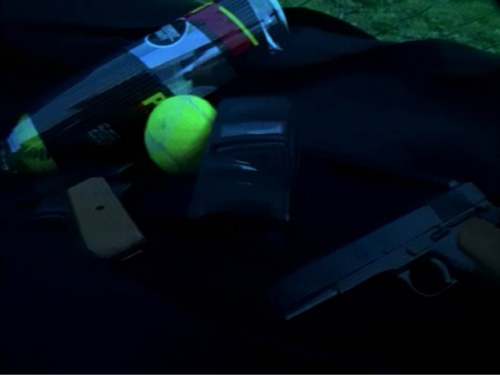 These guns belong to the farmhouse-scene bodyguards who must be the worst bodyguards ever; during their assignment they become bored and decide to play tennis while leaving their guns and mobile phone outside the tennis court (!). 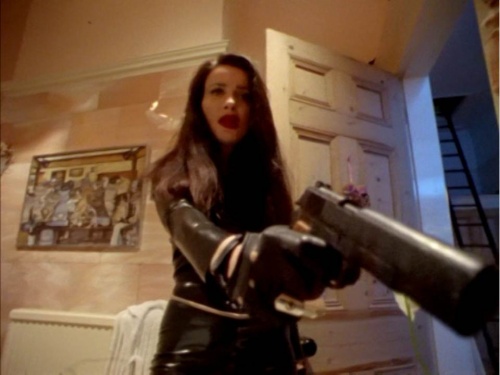 Lilith about to finish off another one of her targets.

A Mini Uzi is seen in the coffin that Lilith Silver uses as her weapons chest. She never uses it in the movie though. It may be an old Daisy SoftAir model 13, an Uzi replica that ejected plastic shells. This replica can be identified by the extra long magazine, and the charging handle is a little bigger and higher than the real deal. 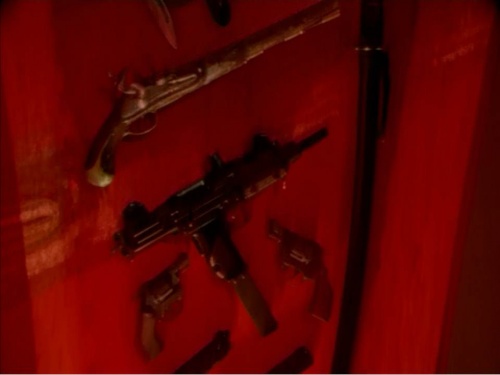 The Mini Uzi in the coffin acting as Lilith's weapons chest. 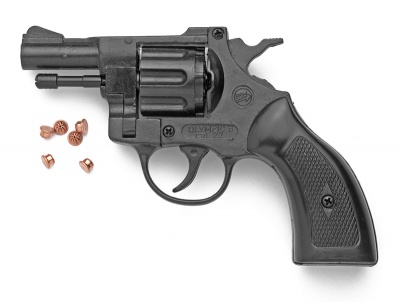 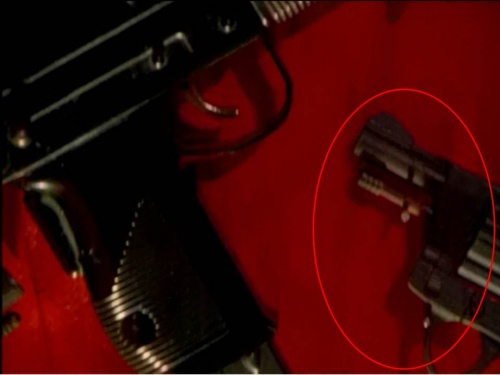 Lilith has a pair of these revolvers in her coffin, but she's never seen using them. 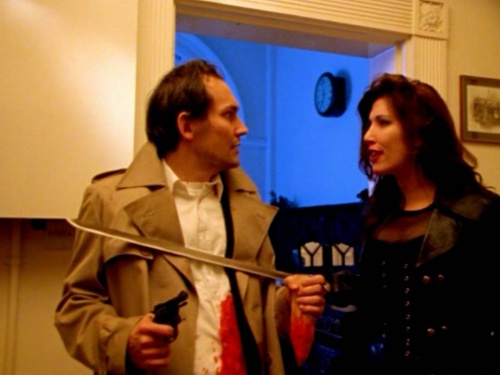 A Bruni 92 blank firing replica of a Beretta 92FS is seen in the hands of Lilith Silver, Sir Sethane Blake (Christopher Adamson) and most Illuminati thugs. It can be identified as such by the crude black grips plus the top firing muzzle flash. 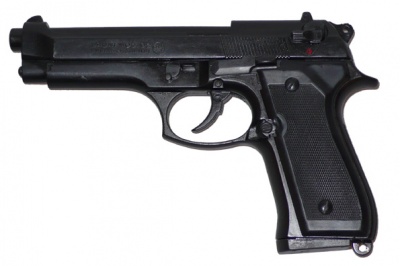 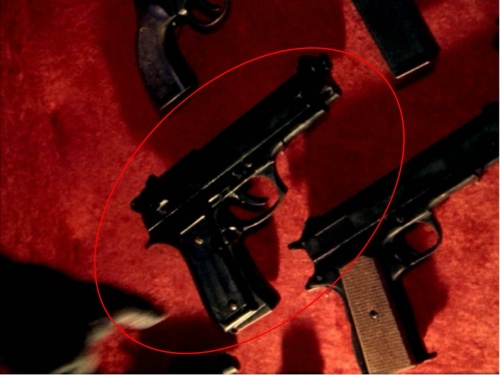 This shot clearly identifies this gun as a Bruni 92 due to the crude finish and the simple grips. 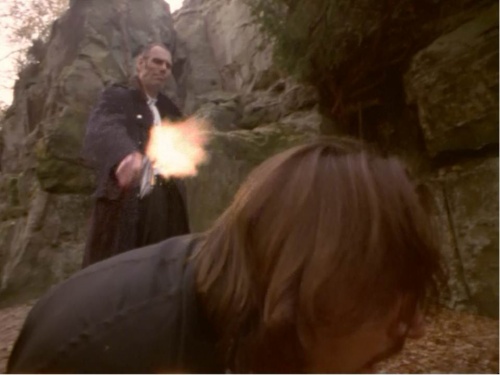 Sir Sethane Blake executing Lilith's present day employer and lover Platinum at the end of the hostage exchange scene in the park. Note the top firing muzzle flash that identifies this gun as a Bruni 92 blank firing replica. 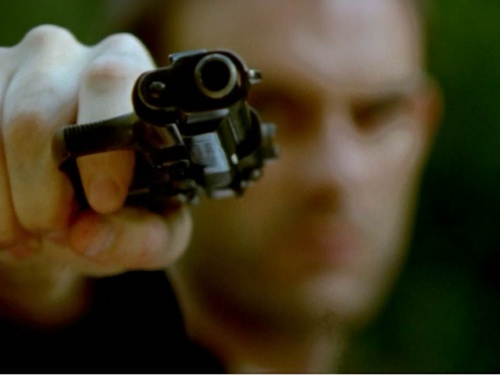 One of the Illuminati thugs aiming his gun at Lilith 'ghetto style'. 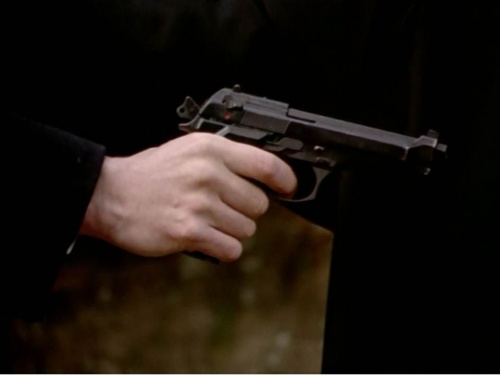 It's never wise to be on the business end of a gun held by a vampire... 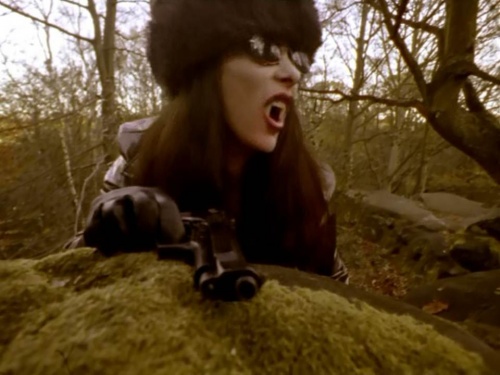 Lilith climbing a rock in pursuit of her attackers, displaying her fangs in rage. Note the horrible lack of trigger discipline, especially towards the camera man.

This flintlock pistol is seen at the beginning of the movie, during the duel between Sir Sethane Blake and his opponent Jack Ryder (Glenn Wrage), the then love interest of Lilith. Lilith Silver herself also uses it when she tries to shoot Sir Sethane Blake to avenge her lover´s death. It would be expected that a percussion cap gun is used due to this scene taking place in 1850, but that's probably a historic err due to the tight budget of the movie. 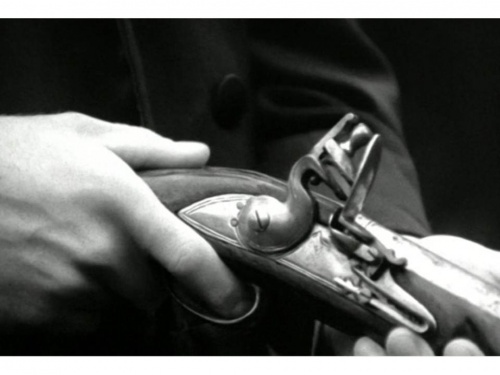 Good shot of the flintlock mechanism of the dueling guns. 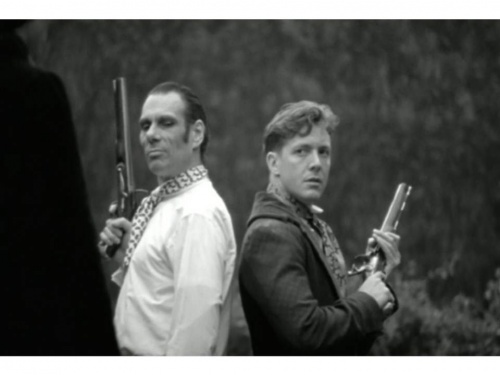 The devious vampire Sir Sethane Blake (left) looking very certain of his victory, while Jack Ryder is beginning to realize that it may not have been a smart move to enter into a duel. 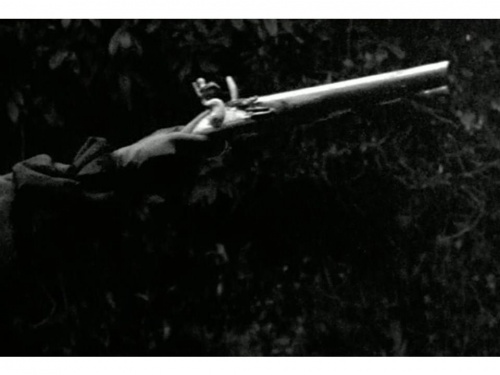