Oblivion is a 2013 science-fiction film that is an adaptation of a unpublished graphic novel co-written by Joseph Kosinski (who also directed this film). The film is set in the year 2077, sixty years after Earth has been devastated from the effects of an alien invasion. Most of humanity has left Earth for a massive tetrahedral space station (called Tet). Tom Cruise stars in the film as Jack Harper, one of the few remaining humans on Earth assigned to protect and maintain drones that extract Earth's resources to fuel the Tet. With only a couple of weeks away from joining the rest of humanity, Jack discovers a crashed spacecraft that forces him to question everything he believes. Kosinski would subsequently reunite with Cruise for the 2022 sequel Top Gun: Maverick.

The following weapons were used in the film Oblivion:

Throughout the film, Jack Harper (Tom Cruise) carries a futuristic rifle as his main armament, which is a dressed up Bushmaster ACR. The rifle has a shell attached to it that surrounds the stock and upper receiver to make it appear more futuristic, and the base-rifle is always seen loaded with 10 round magazines. It has an Oveready/TorchLAB weaponlight above the barrel, integrated inside the shell. Harper always carries the rifle on a custom white Magpul MS-3 sling. Julia Rusakova (Olga Kurylenko) briefly has the rifle slung on her back as she goes to the Radiation zone with Jack on a motorbike.

According to ISS, they had to custom make the short 10 round mag to make it even shorter for the movie.

Jack's Rifle (a Bushmaster ACR housed in a futuristic shell). This is the screen-used firearm carried by Tom Cruise in the film Oblivion. Thanks to James Georgopoulos.

Several rifles can be seen on a rack, as Jack picks his weapons.

Jack loads a mag into his rifle.

Jack looks through the scope to search for a missing drone.

Side view of the integral Oveready/TorchLAB weaponlight on, as Jack searches the library for targets.

Jack looks through the optic at an object falling from the sky.

Jack looks through the optic at an object falling from the sky.

Jack holds his rifle at at the ruins of a skyscraper.

The rifle hangs on Julia's back.

A couple of the resistance fighters carry heavily customized AKM rifles in the film, including Kara (Zoe Bell). The rifles have had their stocks removed, and a large loop-grip fitted on the usual AKM-grip. The rifles are also fitted with black furniture.

Kara holds her custom AKM behind Malcolm. Notice the large loop fore grip, that looks like a part of a custom magazine well too.

One of the resistance members uses a Barrett M82A1 fitted with a custom scope, a large muzzle brake resembling an M107A1 one (except with 5 chambers rather than 4), and a skeleton shell while fighting a drone.

The resistance fighter fires the Barrett.

The resistance member aims his rifle. VIsible in this shot in this shot is the M82A1 style short raised sight rail, along with the pivot for the absent rear folding iron sights.

Sergeant Sykes (Nikolaj Coster-Waldau) carries a skeletony sniper rifle as his primary firearm in the film. Unlike the other skeleton rifles built on Heckler & Koch MP5s, this particular rifle doesn't seem to be based on anything.

Sykes fires his rifle next to another resistance fighter.

Sykes readies his rifle. Here we can see that the weapon doesn't house a real firearm.

Jack Harper (Tom Cruise) carries this futuristic pistol as his sidearm. The pistol is purportedly a custom designed 3D printed prop for the film.

Several pistols can be seen on a gun rack as Jack picks his sidearm.

Jack pulls his sidearm on a dog that scares him.

A side-view of the pistol as the drone next to Jack starts up.

Jack pulls his sidearm in the library as his rifle is lost.

Sergeant Sykes (Nikolaj Coster-Waldau) of the Earth resistance carries an all black Heckler & Koch USP Match as his sidearm in the film. 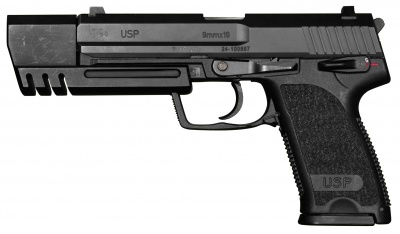 Heckler & Koch USP Match - 9x19mm. This is the screen-used firearm carried by Nikolaj Coster-Waldau in the film. Thanks to James Georgopoulos.

Sykes holds his sidearm on Jack and Julia.

Sykes holds his USP on Jack.

Some of the resistance members carry Heckler & Koch UMP45 submachine guns with futuristic embellishments. Julia Rusakova (Olga Kurylenko) uses one of the guns after its previous owner dies. The UMPs can be identified as the .45 ACP version, due to the straight magazines.

A resistance member carries an UMP45.

A UMP45 with a futuristic handguard lies on the floor.

Julia holds the UMP45 after depleting the magazine.

Several of the resistance members carry Heckler & Koch MP5 series submachine guns, that have been fitted with customized futuristic skeleton shells in the film.

Screen-used stunt Heckler & Koch MP5 from Oblivion. If this particular prop does appear in the film, it has yet to be spotted. Image from Prop Store of London.

Opposite side view of the stunt MP5 from Oblivion. Image from Prop Store of London.

A resistance member holds his futuristic MP5 (circled in red). Note that the receiver end cap in place of a stock is visible in this shot.

A resistance member aims his skeletony MP5 at a drone.

A resistance member holds his MP5 between Malcolm and Jack.

Two Browning M2 machine guns are mounted on a mount improvised from a drone's armored shell in the film's climactic battle. Malcolm Beech (Morgan Freeman) blazes away in a particularly heroic stand.

A side-view of the Brownings, as a drone fires on the gunner.

A view down the barrel as Malcolm prepares to fire on one of the drones.

Malcolm blazes away with the twin M2s.
Retrieved from "https://www.imfdb.org/index.php?title=Oblivion&oldid=1529214"
Categories: