Non-Stop is a 2014 thriller starring Liam Neeson as Bill Marks, a US Federal Air Marshal who while making a transatlantic trip receives a text message that reads that a passenger aboard his airliner will be killed every 20 minutes unless a ransom is paid. Marks then discovers that some incriminating evidence points to him as the hijacker. The film was directed by Jaume Collet-Serra, who has helmed three other Liam Neeson-starring thrillers: 2011's Unknown, 2015's Run All Night and 2018's The Commuter.

The following weapons were used in the film Non-Stop: 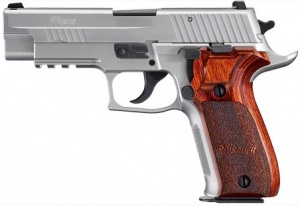 FAM Marks sets his P226 Elite Stainless down in the lavatory when he enters.

Marks draws his P226 Elite during a confrontation. Marks is showing a very good high grip here, though his left thumb is admittedly a bit high.

FAM Marks aims his sidearm on the plane.

US Federal Air Marshal (FAM) Jack Hammond (Anson Mount) carries a SIG-Sauer P229 E2 as his sidearm. It is also used by Bill Marks (Liam Neeson) and other characters in the film. 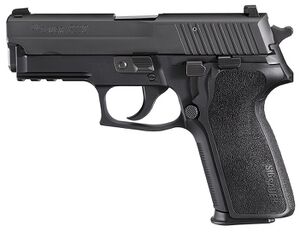 In a brief continuity error the SIG-Sauer P229 E2 changes to a SIG-Sauer P229R in some scenes, which is what the real Federal Air Marshal Service issues to its agents.

Marks opens fire in mid-air with the P229R.
Retrieved from "https://www.imfdb.org/index.php?title=Non-Stop&oldid=1239968"
Categories: