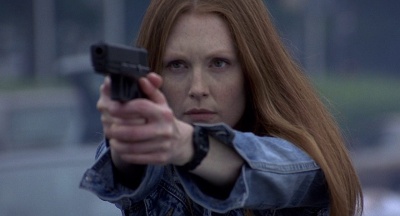 Julianne Moore as Clarice Starling fires a Glock 17 in Hannibal (2001) .

Julianne Moore as Ellie Ferris fires a Colt M4 Carbine in Next (2007).

Julianne Moore is an American actress who has appeared in such films as The Lost World: Jurassic Park, Assassins, The Fugitive (1993), and Hannibal (2001) in addition to her role as President Alma Coin in The Hunger Games film series. She received the Academy Award for Best Actress for her role in the 2014 film Still Alice.