Ninja III: The Domination is a 1984 action movie directed by Sam Firstenberg. It is the third and the last in Golan-Globus Ninja film series that also contains Enter the Ninja (1981) and Revenge of the Ninja (1983). A modern days ninja commits a murder of a well-guarded person and massacres a dozen of pursuing police officers but at last he is killed. But his restless spirit possesses a young woman Christie (Lucinda Dickey) and turns her into a tool of vengeance. Only another ninja, Yamada (Sho Kosugi), is capable to defeat the spirit and liberate Christie.

The following weapons were used in the film Ninja III: The Domination: 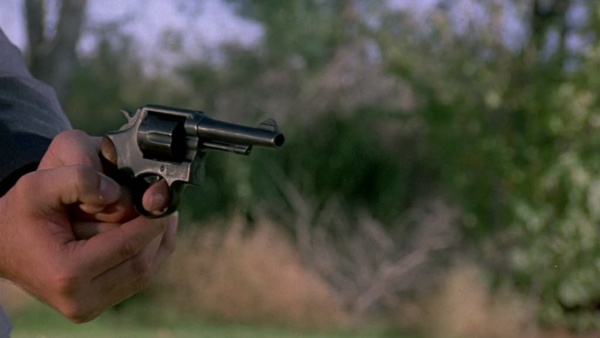 A bodyguard aims his revolver in the opening scene. 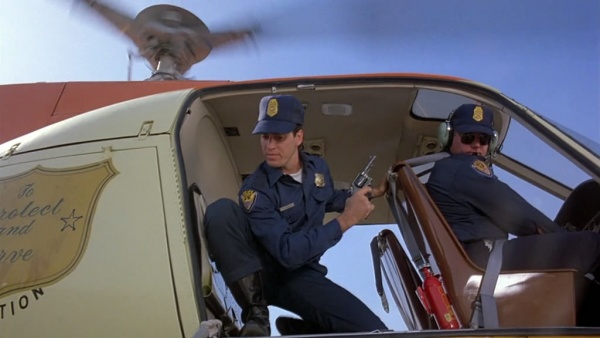 A police officer in helicopter holds his revolver. 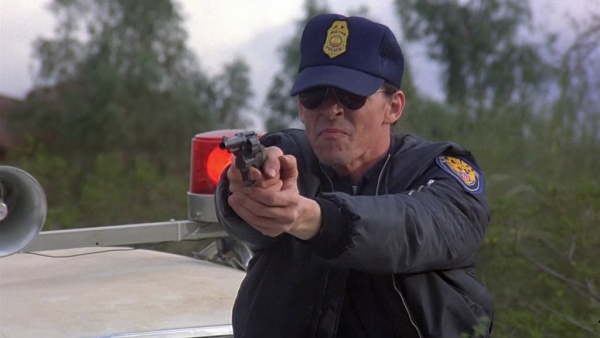 A officer fires at Black Ninja. 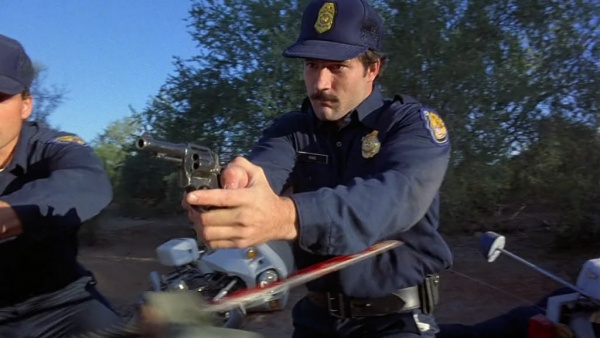 Another officer fires his revolver. It appears to have rounded front sight rather than angular so it can be an old M&P version. 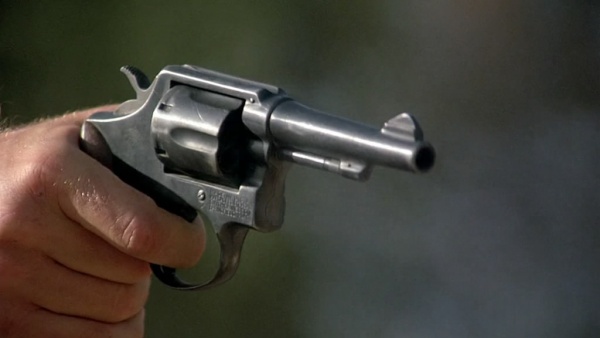 A closeup of a revolver in hand of a police officer. 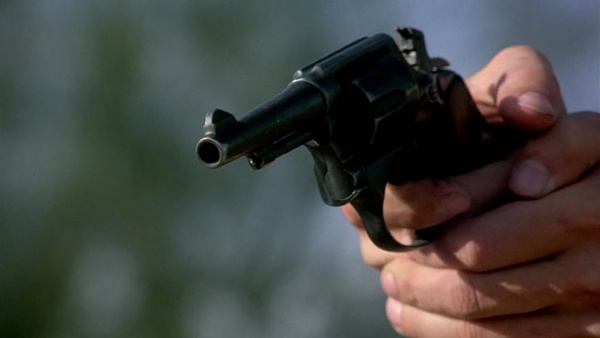 Another revolver, seen from another side. 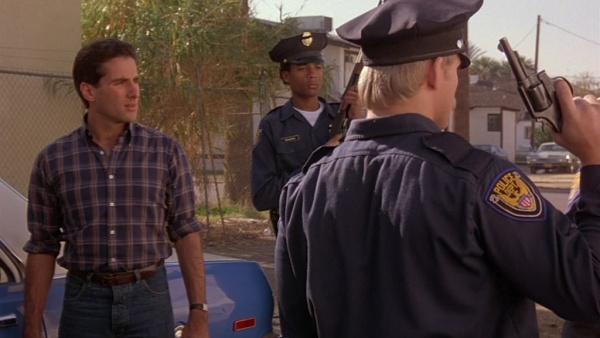 A police officer holds his revolver during the arrest of Yamada. 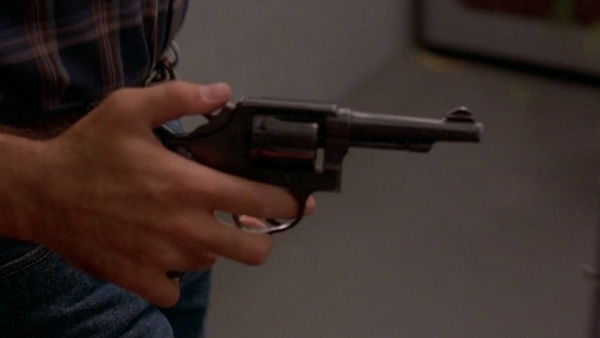 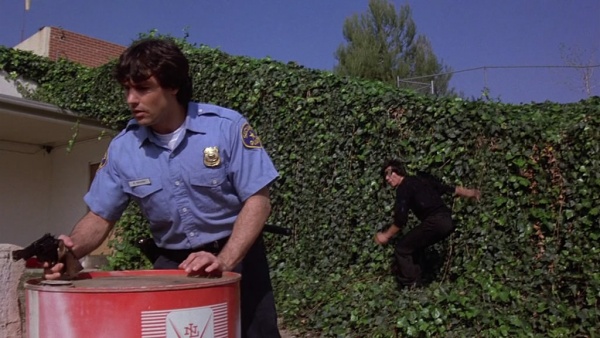 An officer holds his revolver. 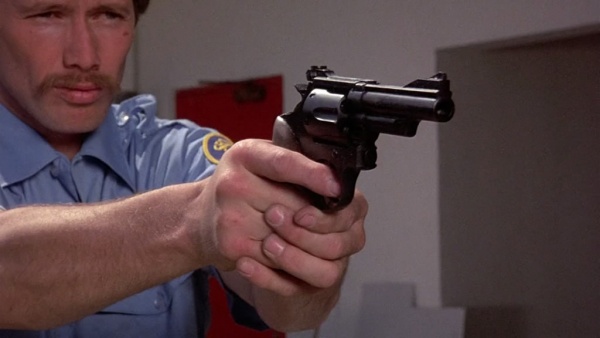 A close view of a revolver in hands of another police officer.

In the opening scene one of the bodyguards is armed with a Colt Detective Special revolver. 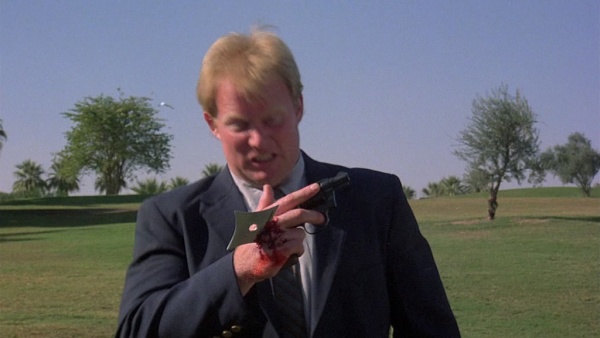 A bodyguard is hit in hand by a shuriken. 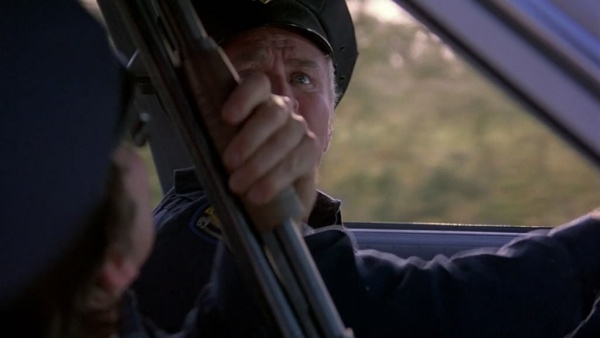 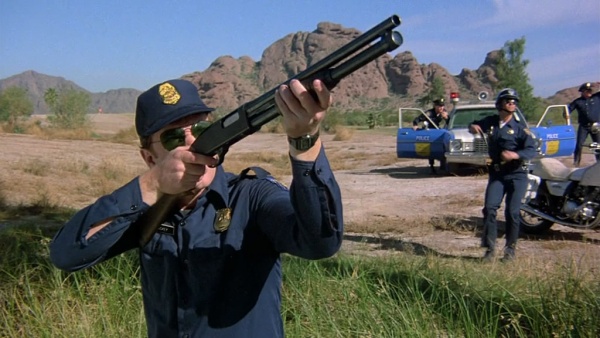 An officer aims at Black Ninja who jumps on the helicopter. 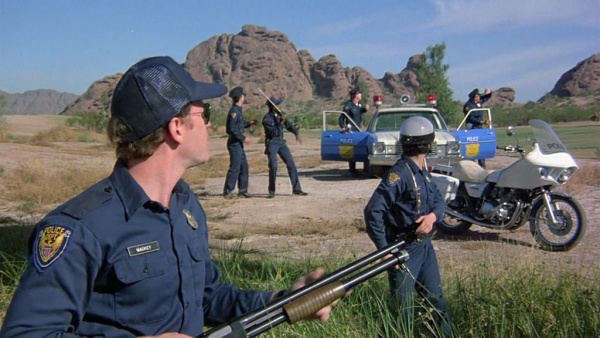 A good view of Winchester shotgun. 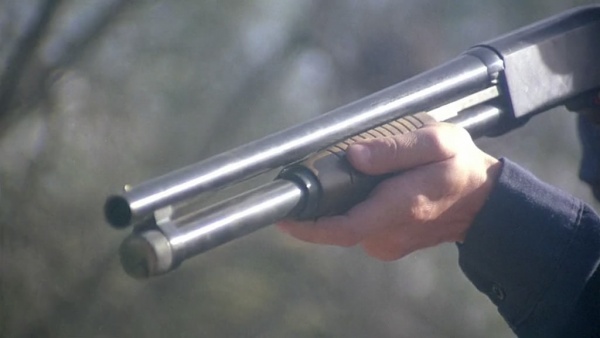 A close view of the barrel and pump. 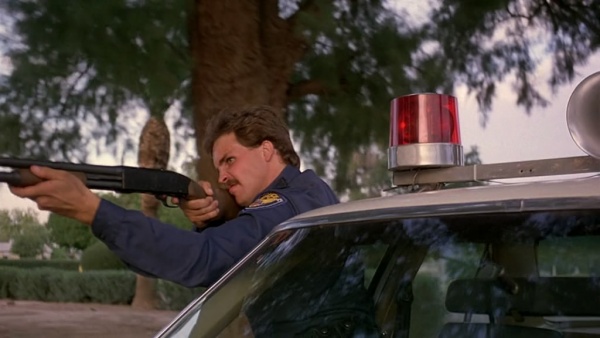 A police officer fires his shotgun in the scene on the cemetery. 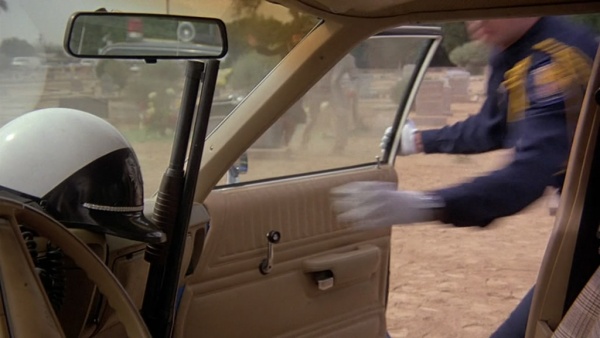 A shotgun in police car in the same scene. 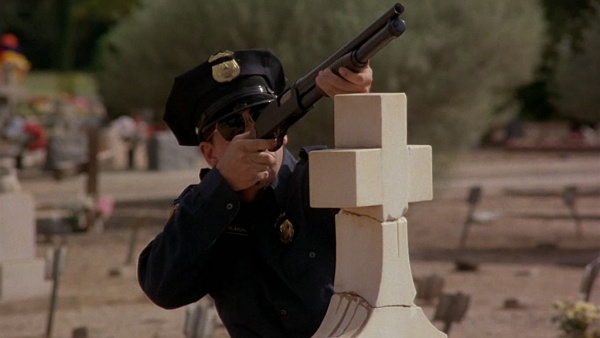 One more police officer fires a shotgun in the same scene.

In the opening scene a police officer carries a Winchester Model 70 sniper rifle. 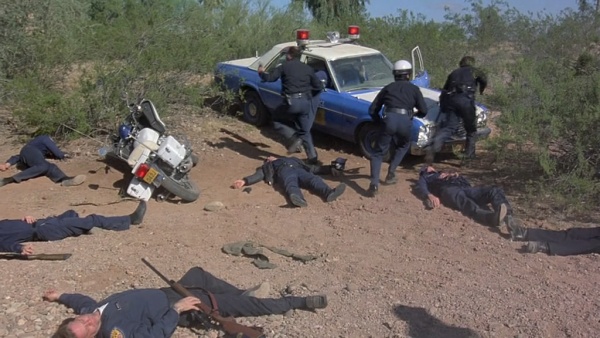 A Winchester Model 70 is seen on the body of a slain officer at the foreground.

In the opening scene Billy Secord (Jordan Bennett) uses an M16A1. In the same scene a sniper in police helicopter carries an M16A1 with sniper scope. 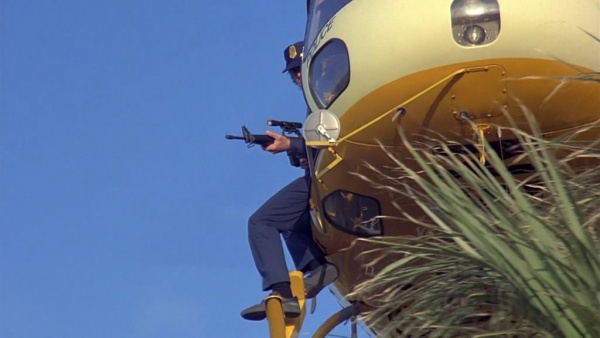 A sniper in helicopter. 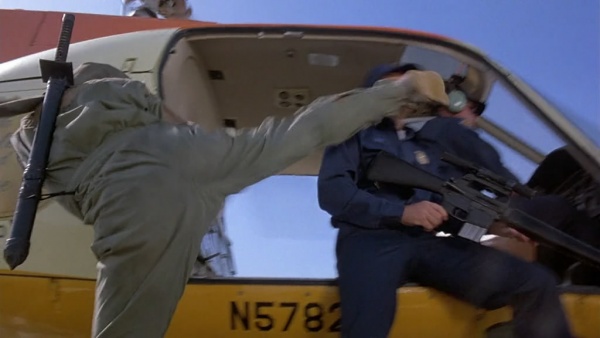 The Black Ninja jumps into the helicopter and disables the police sniper. 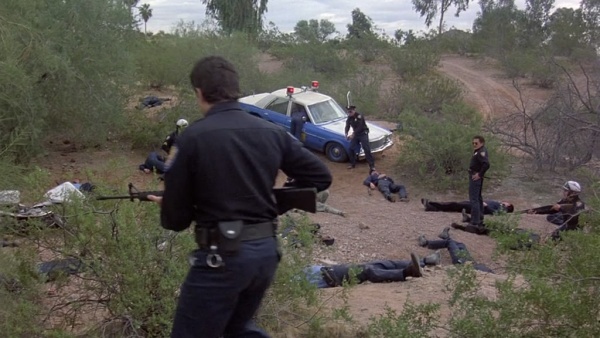 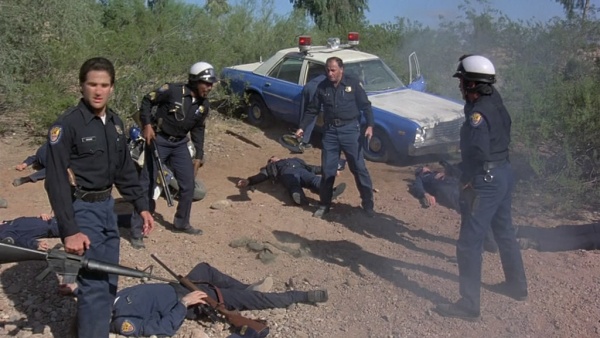 Secord holds his M16 at the left.

When Billy Secord (Jordan Bennett) is seen in flashback, his previously used M16A1 switches to an Armalite AR-18 in a continuity error. 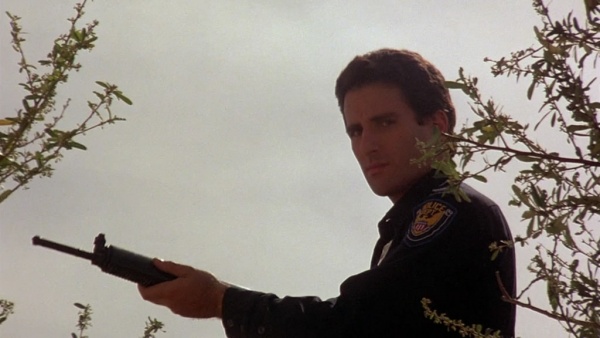 Billy Secord holds an AR-18 in flashback. The rifle lacks its flash hider.

During the scene on the funeral of a police officer a rifle party uses M1 Garand rifles. When ninja attacks, Sgt. Pickwick (Moe Mosley) grabs a Garand and fires it as if the rifle was loaded with live ammunition (even the sound of flying bullets is heard). 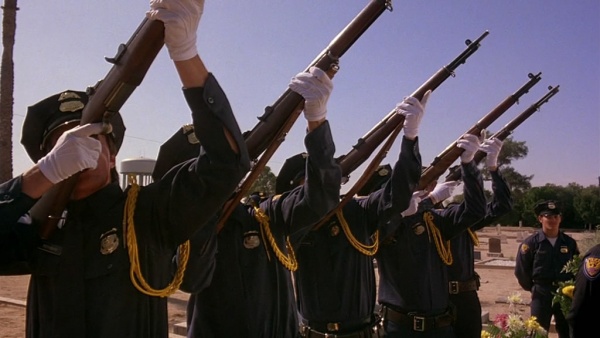 The rifle party readies for a salvo. Note that the Garand in the middle has the extended blank adapter attached to the muzzle. 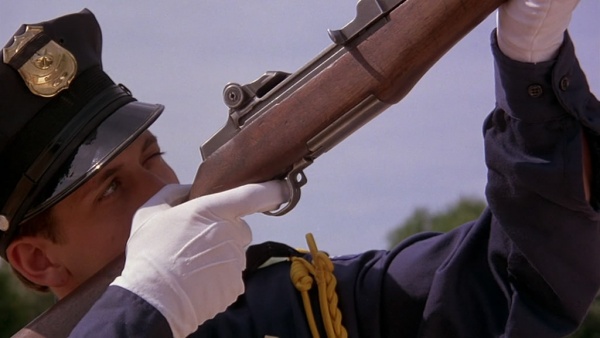 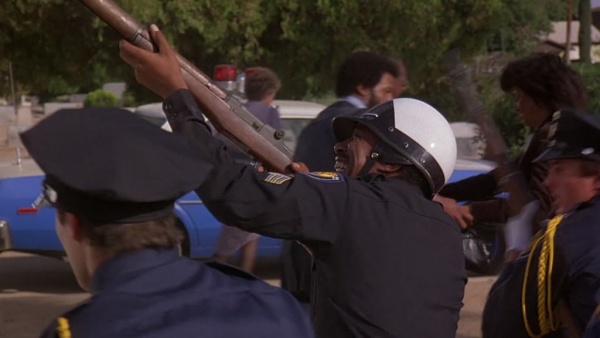