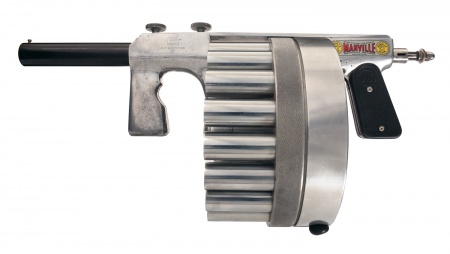 The Hawk MM1 revolver grenade launcher is manufactured by the United States based company Hawk Engineering Co. While the MM1 may look much like a up-scaled Milkor MGL grenade launcher, the MM1 is a more modern version of the Manville 25mm Projectile Launcher, a revolver-type 18-shot 25mm tear gas gun, developed in the USA for law-enforcement use before the Second World War. The MM1, while being relatively heavy and quite bulky, can provide devastating firepower, with a practical rate of fire of up to 30 rounds per minute.

The Hawk MM1 is a revolver-type weapon, with the heavy cylinder being rotated for each shot by the clockwork-type spring. The spring is wound manually during the reloading. To reload the cylinder, the rear part of the gun is released and rotated sideways to expose the rear of the cylinder, which is connected to the front part of the frame and barrel, unlike the original early model Manville version which had to be taken apart to be reloaded.

The Hawk MM1 grenade launcher and variants can be seen in the following films, television series, video games, and anime used by the following actors: