The following weapons were used in the film Lemonade Joe:

Lemonade Joe (Karel Fiala) is equipped with duo Smith & Wesson revolvers with a nickel finish and custom pearl grips. Revolvers appear to be a commercial version (also known as "civilian") of the Smith & Wesson No.3 Russian Model.

P.S. There were a different commercial versions of the Russian S&W, including a snubnose and target models. Revolvers, used in the film, are an version identical to the military model (only without trigger spur). These commercial revolvers in warious configurations were produced both in the USA and Russia, and in various European and South American countries (often being a unlicensed copies). 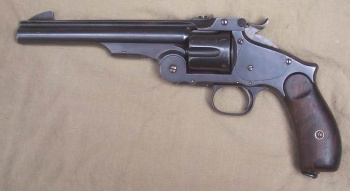 A commercial aka "civilian" verison of the Smith & Wesson No.3 Russian Model - .44 Russian

Lemonade Joe pulls his gun in the whisky-bar and said: "One lemonade, please!".

Cards and guns on the table! Note to the typical for Russian S&Ws long protrusions under the barrels and "pointed" upper ends of the grips.

Horác Badman alias 'Hogofogo' drew his weapon at the cemetery to maliciously shot in the back of his own brother.

"Sign it and nothing will happen to you!" Joe said, handing a letter of recommendation for lemonade to 'Hogofogo'.

Sheriff (Oldrich Lukes) in the movie use the Smith & Wesson Model M&P revolver. Some other characters, including a 'Hogofogo' (Milos Kopecký), also are seen with M&P revolvers.

'Hogofogo' fires M&P revolver during the firefight with a Lemonade Joe.

Grimpo shoot into the ceiling saloon.

One of the bank robbers hold in the hand this revolver.

A Bank officer returns the gunfire.

The Gasser Montenegrin M1880 is seen in hands of one gunmen during the bank robbery. 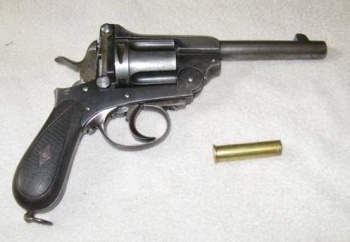 In the hand of one gunmen is can recognized Gasser M1880.

One of gunslingers fired also from a Nagant Revolver.

During the bank robbery, one of the gunslingers use the Single Action Army revolver.

The scene is a little blurry because of the gunpowder smoke, but the weapon can be easy identified.