The following firearms can be seen in the television series Lawman: 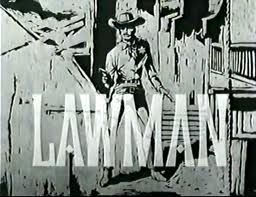 Lawman was a Warner Brothers produced television series that ran on ABC Network from 1958-1962. It followed the adventures of Marshal Dan Troop (John Russell) and his deputy, Johnny McKay (Peter Brown) in Laramie. The episodes were only 30 minutes long so there wasn't as much time for various extras such as romance and supporting character development. Many fans of the show consider the first season to be the best. An effort made to inject more humor and romance into the show ,starting with the second season, in order to attract more female viewers. Many fans feel that the show lost some of it's "edge" due to those changes. The series has not been released on DVD, but it is currently airing on Encore Westerns (2011).

The Single Action Army is also used by various characters.Marshal Troop (John Russell) used the "Artillery" model throughout the run of the series. Both Peter Brown and John Russell were experienced horsemen and shooters and used their influence to ensure some technical accuracy. 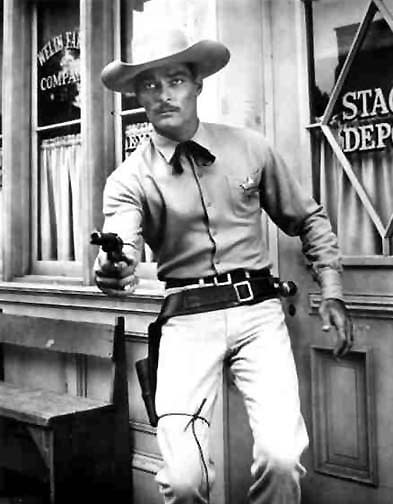 Like so many westerns made from the 1940's - 1970's the Winchester Model 1892 appeared in almost every episode of Lawman. In the opening credits Marshall Troop (John Russell) tosses a Winchester 1892 to Deputy Johnny McKay (Peter Brown). The rifle is used by both villain and hero alike. The 1892 carbine configuration was the most commonly seen version. 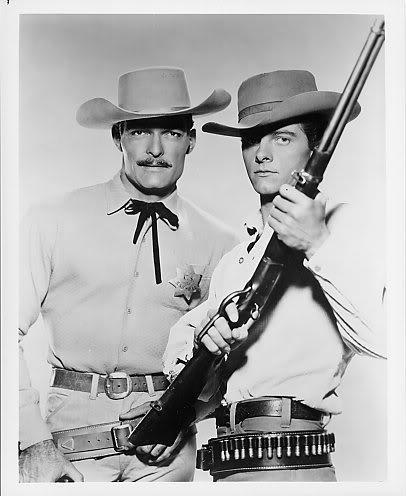 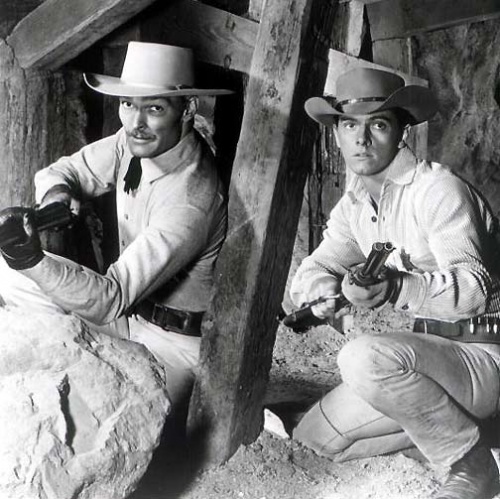 John Russell as Marshal Troop with a Double Barreled Shotgun and Peter Brown as Deputy Johnny McKay with a Winchester Model 1892.

The other firearm that makes a frequent appearance is the 12 Gauge Double Barreled Shotgun . It's interesting that Marshal Troop (John Russell) tends to favor the shotgun over the Winchester while Deputy McKay (Peter Brown) goes with the Winchester 1892. While both characters go to their Colts on a fairly frequent basis (as befitting a 1950's western) they use the rifle and shotgun fairly often as well.

John Russell as Marshal Troop with a 12 Gauge Double Barreled Shotgun and Peter Brown as Deputy Johnny McKay with a Winchester Model 1892.

John Russell was 37 when he was cast for the series. Russell saw Troop as an experienced, level-headed lawman and decided that the character needed to be at least ten years older than Russell was in 1958. So Russell had the make-up department streak his hair and mustache with grey and he lowered his voice.