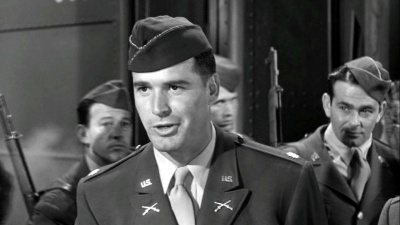 James Garner as Wyatt Earp with a Winchester '73 in the 1967 film Hour of the Gun.

James Garner as Marshal Zane Cooper with a Remington '75 in the 1994 film Maverick.

James Garner (1928-2014) was an American actor whose five decade career included such films as The Great Escape, Marlowe, and Twilight (1998). He portrayed Wyatt Earp in two films: 1962's Hour of the Gun and 1988's Sunset. To television audiences, he is perhaps best known for his roles as Bret Maverick in the series Maverick (1957) and Jim Rockford in The Rockford Files. Notably prior to his acting career, James Garner was drafted into the US Army during the Korean War and was awarded the purple heart twice for being wounded in combat.