Jack Huston holds an M4A1 as Sgt. Sterling in The Yellow Birds. 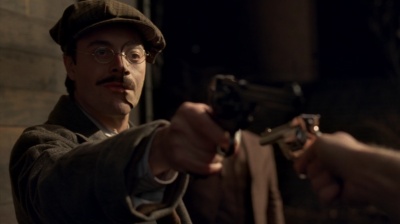 Jack Huston with a Webley Mk VI as Richard Harrow in Boardwalk Empire.

Jack Huston is an English actor who is well known for his role as Richard Harrow in the HBO series Boardwalk Empire. He also is a part of the legendary Huston acting/directing family, which includes his aunt Anjelica Huston and his uncle Danny Huston as well as grandfather John Huston and great-grandfather Walter Huston.