The following weapons were used in the film Hunter Killer:


Hunter Killer is a 2018 American action thriller film directed by Donovan Marsh and based on the 2012 novel Firing Point by Don Keith and George Wallace. Gerard Butler stars as Joe Glass, the commander of the Virginia-class submarine USS Arkansas who must work with US Navy SEALs to rescue the Russian President after a coup attempt. The film also stars Gary Oldman, Michael Nyqvist (who passed away prior to the film's release), and Common.

What appears to be a Smith & Wesson M&P with a tan frame is the sidearm carried by US Navy SEAL Lieutenant Bill Beaman (Toby Stephens). 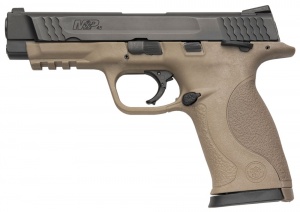 The Smith & Wesson M&P with a tan frame is the sidearm carried by Lieutenant Bill Beaman (Toby Stephens).

Beaman (Toby Stephens) is seen with the pistol.

Martinelli pulls out his SIG-Sauer P226R.

Captain Vlade Sutrev (Ilia Volok) uses a Makarov PM to threaten one of his subordinates. 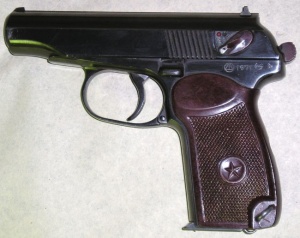 Captain Sutrev threatens his subordinate with a Makarov PM.

An SCAR-L CQC is the rifle carried by Lieutenant Bill Beaman (Toby Stephens).

Lieutenant Beaman uses the SCAR-L CQC during a training exercise.

M4A1 carbines are carried by several US Navy SEALs. These M4s are fitted with tactical lights, suppressors, and AN/PEQ-15 designators.

Both Devin Hall (Michael Trucco) on the left and Matt Johnstone (Ryan McPartlin) on the right armed with the M4A1 during training.

The M4A1 carried by Matt Johnstone (Ryan McPartlin) also is fitted with an M203 Grenade Launcher.

Hall holds his M4A1 carbine after a HALO jump. His M4A1 is equipped with numerous accessories including a SureFire M900A foregrip, suppressor, and EOTech sight.

A US Navy sailor holds a M4A1 carbine with what appears to be a Magpul MOE handguard.

Russian Naval Infantry troops are seen with AK-47s. In reality, they would be armed with the AK-74 or other modernized AK variants.

Renegade Russian soldiers prepare to shoot captured Presidential Security Service agents. The Arsenal AR closest to the viewer is equipped with top and side rails for mounting optics.

Renegade Russian soldiers fire their Arsenal ARs during a firefight.

A custom AK-47-type rifle is the main armament of Lieutenant Tretiak (Igor Jijikine). The AK-47 is in 5.56 caliber, and is possibly based on a Serbian Zastava rifle based on the magazine design. The rifle is fitted with an AK-74-style muzzle brake, RIS handguard, EOTech holosight, and an M4-style stock.

The M4-style stock is visible on the custom AK-47 carried by Lieutenant Tretiak (Igor Jijikine).

A custom AK-47 is the main armament of Lieutenant Tretiak (Igor Jijikine).

Tretiak grabs his rifle. The Zastava-style 5.56 magazine can be clearly seen.

Russian sailors hold Steyr Mannlicher 1895 rifles as they greet the Russian president. In reality, they would be using the SKS carbine for ceremonial purposes.

The Accuracy International AX308 appears to be the rifle used by Paul Martinelli (Zane Holtz).

The Accuracy International AX308 appears to be the rifle used by Paul Martinelli (Zane Holtz) during training.

During the mission, Martinelli uses an AR-15-type marksman rifle. The rifle is equipped with a TrackingPoint computerized sight (although it lacks the other components that are used in TrackingPoint's "Precision Guided Firearm" system) and is used by Martinelli to great effect while fending off Lieutenant Tretiak's soldiers.

Martinelli uses the AR-15 to observe the Polyarny Naval Base. Note that although a TrackingPoint computerized sight is attached to the rifle, the rifle does not have the unique TrackingPoint lower receiver and integrated aiming computer that would enable the rifle to automatically lock onto targets.

Martinelli provides sniper support as the SEALs escape the base.

Martinelli holds the AR-15 during a gunbattle.

A PKB is seen mounted to a UAZ. Note that the front sight is missing.

Matt Johnstone's (Ryan McPartlin) M4A1 carbine is equipped with a M203PI Grenade Launcher, which he uses to blow up attacking Russian vehicles.

Johnstone fires his M203 grenade launcher during a firefight.

Gryazev-Shipunov GSh-6-30 rotary guns (specifically the improved AO-18K variant) mounted to the Kashtan Close In Weapons System (CIWS) are fired by a Russian destroyer while intercepting missiles fired by the renegade Russian forces. 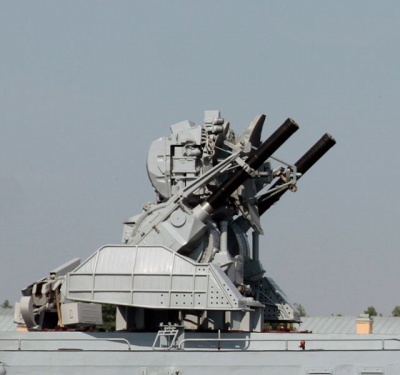 The Kashtan CIWS is fired at the missiles.
Retrieved from "https://www.imfdb.org/index.php?title=Hunter_Killer&oldid=1408776"
Categories: