The following weapons were used in the film Hick:

A Smith & Wesson Mk II Hand Ejector that has been converted to .45 Long Colt with a 5" barrel is the main handgun carried by Luli McMullen (Chloë Grace Moretz) in the film. Eddie (Eddie Redmayne) later uses Luli's Smith & Wesson in the film's climax. 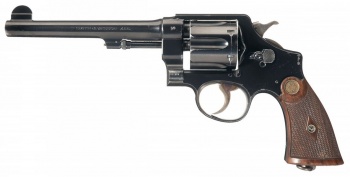 Luli receives a Smith & Wesson for her birthday.

"A pistol for a pistol."

A close up of the S&W's cylinder.

A close up of the barrel of Luli's S&W.(Note:On the barrel it says Smith & Wesson 45 Colt).

Luli pretends to be Dirty Harry while holding her S&W.

Luli McMullen (Chloë Grace Moretz) pretends to blow away smoke from her S&W.

Luli takes out her S&W.