Hawk Industries Co., Ltd. is a Chinese company located in the city of Qiqihar in northern China. Hawk is specialized in the production of shotguns, which are adopted by multiple Chinese police forces. The Hawk shotguns are primarily patterned after Remington 870 and Remington 1100 shotguns.

The Hawk shotgun series and variants can be seen in the following films, television series, video games, and anime used by the following actors:

The Hawk Type 97 is patterned after the Remington 870. The base Type 97 configuration has a pistol grip and no stock, and often has a foregrip foreend. 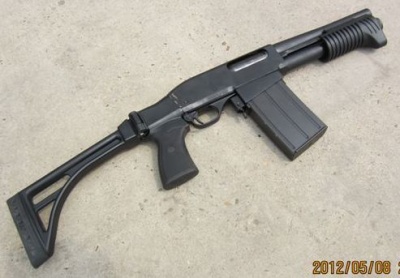 The Hawk Semi-Auto shotgun is patterned after the Remington 1100.

There are two detachable magazine-fed bullpup shotguns manufactured by Hawk, one in pump-action, the other semi-auto. Neither use the Type 97 designation and thus are included in a separate category.