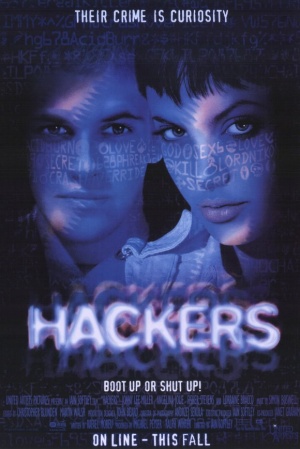 Hackers is a 1995 thriller directed by Iain Softley (The Skeleton Key) and focuses on a group of computer programming experts trying to unravel a conspiracy by a master hacker (Fisher Stevens). The cast includes Jonny Lee Miller, Wendell Pierce and Angelina Jolie.

The following weapons were used in the film Hackers:

The Secret Service Agents who arrest Dade Murphy in Seattle, 1988 are armed mostly with snub-nose Smith & Wesson Model 19 revolvers, which would have been standard-issue to the Secret Service at the time.

In 1988, a Secret Service Agent bursts into Dade Murphy's house in Seattle with a snub-nose Smith & Wesson Model 19 (very blurry, visible in his hands).

A Secret Service Agent prepares to enter Dade's room with his S&W Model 19 at the ready, while a SWAT officer with an M16 stands in the foreground.

A Beretta 92F is carried by at least one of the SWAT officers in Seattle, 1988.

A SWAT officer in 1988 enters Dade's house in Seattle with a Beretta 92F (circled in red, and very hard to see).

SIG-Sauer P226s are carried by all of the Secret Service Agents in 1995, including Agents Richard Gill (Wendell Pierce), Ray (Marc Anthony), and Bob (Michael Gaston). In real life, the smaller P228 was standard-issue to the Secret Service at the time this movie was filmed.

Agent Bob (Michael Gaston) wields his P226 during the arrest of Phreak (Renoly Santiago) ; Agent Ray's P226 is also visible in the foreground at right.

Agent Richard Gill (Wendell Pierce) wields his P226 during the climax at Grand Central Station, while SWAT officers in the background wield M16s.

Agents Gill, Bob, and Ray point their P226s at the hackers at Grand Central Station.

M16A1 with A2 handguards

The SWAT officers who arrest Dade Murphy in Seattle, 1988 are armed mostly with M16A1 assault rifles (recognizable by their thin barrel profiles and rear sights) fitted with M16A2-style hand guards. Some of these rifles also have Phantom flash hiders. Some of the SWAT officers in 1995 also use M16A1s.

The Secret Service prepares to enter Dade's room in Seattle, 1988. The SWAT officer on the left is armed with an M16A1.

A SWAT officer charges into Grand Central Station with an M16A1.

The SWAT officers throughout the movie (but mostly in 1995) are armed with M16A2 assault rifles, some of which are fitted with Phantom flash hiders.

Phreak gets arrested; the officer circled in red carries an M16A2 fitted with a Phantom flash hider.

Dade (Jonny Lee Miller) and the other hackers get arrested in Grand Central Station; the SWAT officer behind Dade has an M16A2.

During the climax in Grand Central Station, one of the SWAT officers appears to be armed with an early M16 rifle fitted with M16A2 hand guards and an M16A1 flash hider.

The Secret Service enters Grand Central Station, as seen from above. The SWAT officer circled in red appears to have an early M16 (recognizable by the "slab side" receiver), instead of the M16A1s and M16A2s used by the others.

Phreak (Renoly Santiago) is arrested. An NYPD officer points a Glock 17 at him (bottom left, circled in red). Agents Bob and Ray are pointing their SIG-Sauer P226s at him (right), and also note the "Phantom"-style flash hider from an M16 (top left).

A SWAT officer leads Dade out of Grand Central Station. Notice that he appears to be carrying a Glock 17 in his thigh holster (circled in red), along with his M16.

NYPD officers and Secret Service Agents use the Manufrance Rapid (possible one of the export versions, such as La Salle Riot Gun) shotgun in several scenes.

Joey (Jesse Bradford) gets arrested after stepping out of the shower; a Secret Service Agent points a Manufrance Rapid shotgun at him (left), while Agent Ray (Marc Anthony) wields a SIG P226 (right).

When Joey (Jesse Bradford) is arrested, one of the Secret Service Agents is armed with a Smith & Wesson 3000 shotgun.

As Joey is led out of the bathroom, another Secret Service Agent holds a Smith & Wesson 3000 shotgun.

The Agent with the Smith & Wesson 3000 tries to restrain Joey when he tries to stop another Agent from taking away "Lucy" (his computer).

When Phreak is arrested, one of the NYPD officers who enters his room carries an Ithaca 37 with a synthetic skeleton stock.

Phreak (Renoly Santiago) is arrested by the Secret Service and NYPD; the NYPD officer in the back (circled in red) has an Ithaca 37 with a synthetic skeleton stock.

When Dade and Kate go to visit Razor (Darren Lee) and Blade (Peter Y. Kim), a robot arm points an AMC Auto Mag Pistol at them. When Blade says, "Waste the dude", the weapon "fires" a small flame from the end of its barrel. The prop itself, however, appears to be a real, blank-adapted Auto Mag pistol. 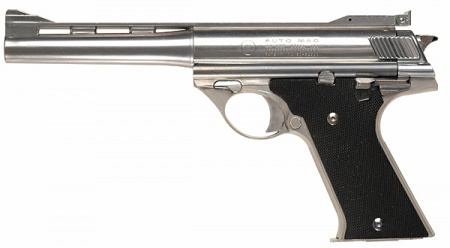 At Razor and Blade's headquarters, Dade Murphy (Jonny Lee Miller) and Kate Libby (Angelina Jolie) are held at gunpoint by a robotic arm fitted with an AMC Auto Mag.
Retrieved from "https://www.imfdb.org/index.php?title=Hackers&oldid=1345236"
Category: