Gallipoli is the 1981 Australian World War I film directed by Peter Weir and starring Mark Lee and Mel Gibson as two young men who meet at a race and become friends who put aside their dreams to join the war effort. Their friendship grows as they go to the Gallipoli peninsula in Turkey to fight with the rest of the Australian Light Horse troops. They endure the hardships and boredom of the trench warfare at Gallipoli. Their unit is then ordered to charge Turkish lines as a diversion for the British landings. The Light Horse charges toward enemy lines with devastating effects on the ANZAC troops. The cast included Bill Kerr, Harold Hopkins, and Charles Lathalu Yunipingli.

The following weapons were used in the film Gallipoli:

A captured Luger P08 pistol is glimpsed resting on a table but is then briefly held by Frank Dunne (Mel Gibson) to exchange it.

The captured Luger Pistol with an emblem plate on the grip sitting on a table next to a Turkish bayonet.

Frank holds the pistol while negotiating an exchange.

At the beginning of the movie, a referee starts up the first race of Archy and Frank with a Webley Mk VI revolver. Another Webley revolver is drawn from a holster by Major Barton (Bill Hunter) as he readies the ANZAC troops for the charge.

After loading a single round into the cylinder the referee closes the revolver.

He gives the signal to start the race.

A Webley Mk VI being raised by Major Barton to ready the last charge.

ANZAC soldiers including Archy Hamilton (Mark Lee) are seen with early Lee-Enfield No. 1 Mk III rifles that are equipped with the magazine cutoff.

ANZAC soldiers of the 10th Light Horse Regiment aiming their rifles during the training in Egypt. The second one is an Mk.III.

Archy Hamilton holds the SMLE during the same training. The magazine cutoff is visible.

Archy and one of his comrade with the rifles before the last assault.

"What are your legs?"
Archy prepares to go over the top with a last address to his former rival.

Frank Dunne trains with the Lee-Enfield with the rest of the ANZAC troops.

ANZAC soldiers fixing their bayonets in preparation of the first wave.

Australians holding their SMLEs before the first assault. Note the corrugated-squared cooking piece.

An ANZAC fires his SMLE at a Turk while covering his mate who repairs a telephone wire.

Turkish troops are seen armed with Mauser 1903 Rifles during the Battle of the Nek. While not seen in detail, these Mausers could be a mix of original M1903 and post-war updated M1903/30 variants, because there are features of both of them.

Turkish troops firing Mauser rifles at charging ANZAC troops from the edge of their trench. On the upper rifle, the striking large stripper clip bridges can be seen. Some other rifles have no metal plates on the stocks.

Closer view of one Turkish Mausers without the bayonet lug what is a possible sign for an updated variant.

What appears to be a Sharps rifle is briefly glimpsed when the men are seen enlisting.

The Sharps rifle is held by an Australian farmer.

The Maxim MG08 is used to devastating effect against the ANZAC troops.

A Maxim firing from a bunker. 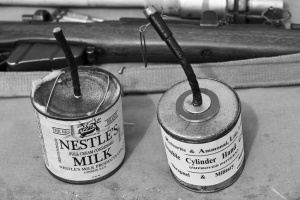 An ANZAC ignites a Jam Tin with his cigarette to greet the Turks with "Morning Abdul!".

One Jam Tin Grenade being filled among other things with .303 rounds.

Another bunch of cans being transformed into grenades. 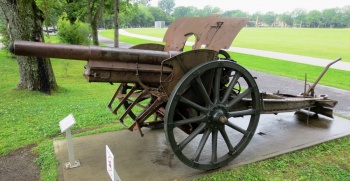 The Feldhaubitze on the right.

A British Ordnance QF 18-pounder Mk. II Field Gun can be seen next to the Feldhaubitze. 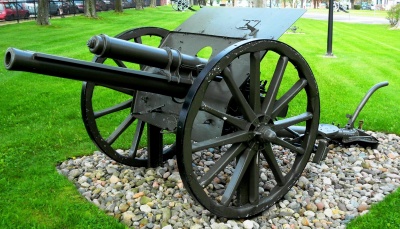 The 18-pounder with folded shield on the left. Note none of these two guns are actually being fired; the camera wobbles back and forth to simulate this.

Rear view of the receiver and the now-folded up shield.

The Bayonets of the SMLEs are Pattern 1907 of a mix of early hooked Quillon and later common variant without the hook. The Turkish Mausers are fitted with Model 1890 Mauser Bayonets.

SMLEs with fixed P07s without the hooks. Many of these bayonets are made of rubber what can be seen when starting the charge.

A closer view of a Turkish Mauser bayonet shows the hook's ball.