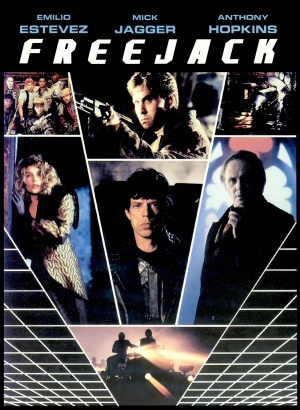 Freejack is a 1992 science fiction thriller starring Emilio Estevez as a race car driver in the then-present year of 1992 is transported through time to the year 2009, where his body will be used to transfer the consciousness of a dying industrialist (Anthony Hopkins). The film was directed by Geoff Murphy (Young Guns II) and the cast included Rene Russo, Jonathan Banks, and Mick Jagger.

The following weapons were used in the film Freejack:

In the future year of 2009, Alex Furlong (Emilio Estevez) is given what appears to be a Glock 19 which he carries throughout the film. This is one of earliest appearances of the 19 model in a film, being introduced a year earlier in 1991's The Hard Way.

In the future year of 2009, Alex Furlong (Emilio Estevez) is given a Glock.

Alex opens fire in the restaurant with the Glock. His costume here makes him look a lot like Billy the Kid in the Young Guns films. Freejack director Geoff Murphy also directed Estevez in Young Guns II.

Alex with the Glock.

A restaurant patron is seen pulling a Single Action Army on David.

A restaurant patron is seen pulling a Single Action Army on David.

One of the bonejackers accompanying Victor Vacendak (Mick Jagger) is armed with the Beretta M1951. 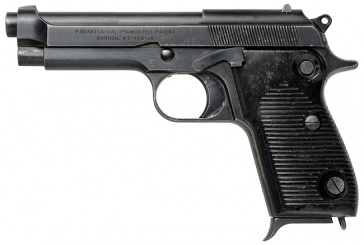 Closeup of the Beretta M1951 pistol in her hand.

Seen in the hands of a Bonejacker before he was killed by Alex Furlong with the stunner on the Bonejacker's Ruger bullpup rifle.

A 12 Gauge Double Barreled Shotgun is seen held by the Nun (Amanda Plummer) who meets Alex.

A 12 Gauge Double Barreled Shotgun is seen held by the Nun (Amanda Plummer) who meets Alex.

Brad (David Johansen) brandishes a MAC-10 when he meets Alex in 2009. He waves it around but never fires it. A mercenary is seen armed with two MAC-10's.

Alex is threatened with the MAC-10.

A mercenary on the right is seen armed with two MAC-10's.

A modified Goncz GA-9 pistol is carried by Victor Vacendak (Mick Jagger) throughout the film. 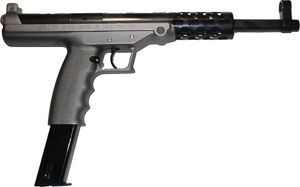 A modified Goncz GA-9 pistol is carried by Victor Vacendak (Mick Jagger) throughout the film.

Victor fires the pistol on the right.

A Heckler & Koch MP5A3 was briefly seen in the hands of a street gang member when Alex Furlong was looking for Brad.

This weapon is carried by Boone, the driver/bodyguard of Furlong's girlfriend Julie Redmond (Rene Russo), along with a Samurai sword and a hand grenade. Boone uses all these to dispatch several of Michelette's mercenaries while sacrificing himself to allow Furlong and Redlund to escape. 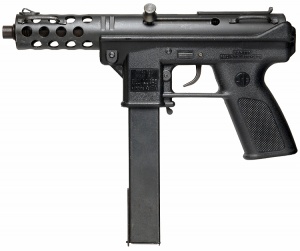 Another mercenary is seen armed with a Sa vz. 61 Skorpion .

An unmodified Ruger AC556 is seen in the hands of various gang members and mercenaries in the film.

The Ruger MZ14 Bullpup (similar to ones seen in Total Recall (1990)) is the primary weapon of the Bonejackers. The rifles were fitted with a fictional "stunner" tube that was fitted to the top of the rifle.

Victor (Mick Jagger) is threatened with the rifle.

Another weapon used by Victor is the Browning M1919 machine gun.

Another weapon used by Victor is the Browning M1919 machine gun.

What appears to be a Browning AN/M2 machine gun is mounted on a Bonejacker vehicle.