Force 10 from Navarone is a 1978 World War II adventure film starring Robert Shaw and Edward Fox as British spies who accompany American commandos led by a lieutenant colonel (Harrison Ford) on a mission to Yugoslavia to destroy a key bridge held by the Germans. The film was directed by veteran James Bond director Guy Hamilton and was based on Alistair MacLean's sequel novel to The Guns of Navarone. This was also Robert Shaw's penultimate acting role prior to his untimely death in 1978.

The following weapons were used in the film Force 10 from Navarone:

The Walther P38 is used by the German forces as well as Mallory (Robert Shaw) and Lt. Col. Mike Barnsby (Harrison Ford).

The Walther P38 is held by Sgt. Bauer (Michael Sheard).

The Walther P38 is used by Mallory (Robert Shaw).

Barnsby with the Walther at the mountain pass.

Mallory (Robert Shaw) and Lt. Col. Mike Barnsby (Harrison Ford) as well as Reynolds (Angus MacInnes) are seen carrying the Browning Hi-Power after their jump behind enemy lines, but lose these weapons when they are captured by the Chetniks. 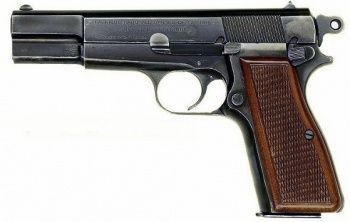 Reynolds (Angus MacInnes) holds the Hi-Power as he meets up with Barnsby and Mallory, who also hold Hi-Powers.

The MP40 is used by both German forces and the partisans. It's also used by Weaver (Carl Weathers), Lescovar (Franco Nero), and Maritza (Barbara Bach).

Maritza (Barbara Bach) with the MP40 just after she opens fire.

Weaver (Carl Weathers) with the MP40 at the mountain pass.

The Karabiner 98k is also used by German and partisan forces.

Czech-made Karabiner 98k like the ones seen in the film - 7.92x57mm Mauser

German soldiers with their Karabiners slung as they guard the dam.

True to life, the Partisans are seen using Serbian Mauser M1924 rifles, and provide some to the Allied commandos.

The MG42 is also used by German forces and partisan forces.

A MG42 is seen being fired by German soldiers at the bottom.

A partisan soldier is seen carrying a ZB26 just before the battle of the bridge.

The tanks seen in the film are Russian T-34/85 models (the late war T-34 variant), as this part of the film was shot in Yugoslavia where T-34s were easily available. During World War II, German forces did take captured Russian tanks, immediately painting over them with Balkenkreuz for field identification. This mostly happened on the Eastern Front and Russian tanks were not seen in the Balkans (too far south). The practice stopped since German Aircraft would strafe captured Russian armor, going mostly by general shape rather than markings to determine who was friend or foe.

The German tank seen here is actually a Russian T-34.