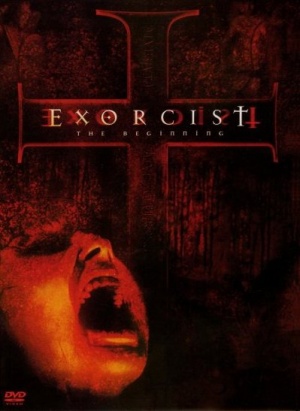 The following weapons were used in the film Exorcist: The Beginning:

What appears to be a 12 Gauge Double Barreled Shotgun is used by several characters throughout the film. Lankester Merrin (Stellan Skarsgård) uses it to fend off a pack of hyenas and fires more rounds than the weapon can hold. Merrin's guide and translator Chuma (Andrew French) is seen holding it in various scenes.

Lankester Merrin uses a 12 Gauge Double Barreled Shotgun to fend off a pack of hyenas.

The Lee-Enfield No.4 Mk.I is seen as the primary rifle used by the British Army in the film.

British soldier chambering his No.4 Mk.I.

British soldier with his No.4 Mk.I.

British soldier aiming his No.4 Mk.I.

The front sight and muzzle of the No.4 Mk.I.

British troops firing their No.4 Mk.I rifles. A couple of them have bayonets attached.

The Enfield No.2 Mk.I revolver is seen as the primary issue sidearm for the British officers in the film. Major Granville (Julian Wadham) uses it to kill the Turkana village chief and not long after on himself when the demonic forces in the area drives him insane.

Major Granville reaches for his revolver.

Major Granville turns his revolver on himself.

British officer shooting his own troops with his revolver.

When the Turkana village warriors decide to attack the British troops in retaliation for the murder of their chief, British troops can be setting up and later using the MG42 machine gun. This weapon may have been captured during the North African campaign and remained in service.

British troops setting up the MG42.

The MG42 being loaded.

In the World War II flashbacks that showed how Merrin lost his faith, the Luger P08 is used by Obersturmführer Kessel (Antonie Kamerling) to execute a Dutch village girl and several Dutch village members where Merrin is forced to choose which ones in order to save the entire village from slaughter by the Waffen SS in retaliation for a trooper killed.

Obersturmführer Kessel moments before he executes a little girl with his P08.

The Karabiner 98k is seen in the hands of numerous Waffen SS soldiers in the flashback set in World War II.

The MP40 is also seen in the hands of Waffen SS soldiers in the flashback set in World War II.

Waffen SS soldier with his MP40.
Retrieved from "https://www.imfdb.org/index.php?title=Exorcist:_The_Beginning&oldid=1142081"
Categories: