Colonel Pitts (Larry Hagman) carries a Colt Commander as his sidearm. He is seen with the pistol when he searches Joanna's house. A Colt Commander is also seen briefly being used by a Ranger during the church battle. This was probably a stand-in for the regular Colt 45, the Colt Commander itself wasn't introduced on the market until after World War II.

Hauptmann Von Neustadt (Sven-Bertil Taube) and his Sten Mk. II submachine gun disassembled and attached to his chest harness ready to parachute into the UK (All Steiner's men parachuted with their Sten guns in this way). Note the two-finger salute. This was (and is) the actual Polish military salute.

Brandt smashing out a church window with his Sten Mk. II.

Colonel Pitts (Larry Hagman) and most of his Rangers, including Captain Clark (Treat Williams), are equipped with anachronistic M2 Carbines fitted with curved 30 round magazines instead of the more historically accurate straight 15 round magazines. Several of the Rangers' magazines are seen taped together "Jungle Style" for faster reloads. Neither the M1 nor M2 Carbine was ever issued this way (en masse) during WW2, but for production reasons this weapon replaced both the M1 Garand and the Thompson Submachine Gun, which are mentioned in the book but not carried or shown in the movie. In the novel, the Germans were also equipped with the Bren light machine gun but this did also not translate into the movie.

Some Karabiner 98ks are used by German soldiers at the train station.

A German soldier second from right marchs with his Kar98k.

The soldiers holding their FN Mausers.

German soldiers aiming their FN Mauser at Steiners men during a confrontation. Note the straight bolts and the distinct "hump" of which the rear sight is mounted on.

One of Steiner's Fallschirmjaeger is seen in backstepping off the train with his weapon.

Liam Devlin (Donald Sutherland) acquires a 12 Gauge Double Barreled Shotgun along with a motorcycle when he takes up the post of gamekeeper at Studley Constable's stately home estate. The shotgun also is used by Molly Prior (Jenny Agutter). 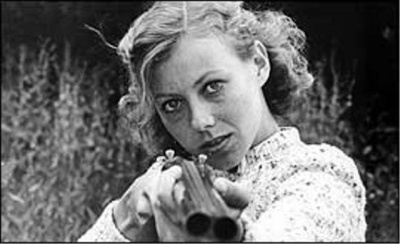 A Browning M2 machine gun is seen mounted on an M3 Half-track and later being used during the assault on the church.

A Bofors 40mm is briefly seen at the German naval base.